And Then Put Out the Light 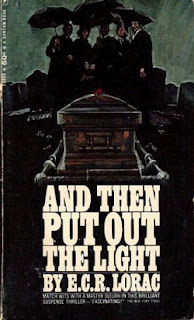 Lillian Mayden was a sick woman. Oh, not the way she claimed. That was all hypochondria, but she was sick in her mind and in her soul. She operated a network of spies and gossips that might make MI6 envious. But her operations weren't meant to make people feel more secure. She used what she learned to write vicious letters accusing her neighbors of everything from immorality to embezzlement, from cheating at cards to buying meat from the black market. She kept meticulous records and filed copies of al her letters and every scrap of "proof" she could glean. She kept the village in fear of where her letters might appear next...until one day she died.

Her death was ascribed to a heart attack by an elderly doctor filling in for her injured regular practitioner. Her regular doctor insists a heart attack is nonsense, but he doesn't suspect murder. But then those who might be able to shed light on the matter begin dying in similar "natural" or "accidental" ways and the town's gossips start pointing accusatory fingers...at Mr. Mayden, at Gillian Arkholme--who had suffered greatly from Lillian Mayden's slander, at Mrs. Bentham--who it's said still harbored feelings for Guy Mayden (and, of course, now he's free...). Inspector MacDonald is brought in to separate the wheat from the chaff and find out if there's any truth to the rumors of murder. And if so who benefits most from the silencing of Lillian Mayden's poisoned pen.

This was, I believe, the very first Lorac I ever read, long ago and far away before blogging was a gleam in the internet's eye. Actually, before the internet was a gleam in anyone's eye. And for reasons unknown to me, I never made the connection between the title and the plot. Even now with 2020 brain, it took a little bit for the light to dawn. Rereading this now, I'm really kind of amazed that I put Lorac on my "To Be Found" list--because this is a rather squalid little story. Mrs. Mayden was one of the nastiest poison pen writers to come along in crime fiction and one really can't feel terribly sorry that she has gone off to her final judgement. Not that the villain of the piece is much better...after all, they'd be quite content to let someone else answer for their crimes and they're not too picky about who it is.

What saves this story is the other village characters and our policemen, Inspector MacDonald and Inspector Reeves. Both of these gentlemen have ways about them that make the villagers open up and talk to them--MacDonald visiting the middle and upper classes and Reeves mixing well with the laborers and such. It's also worth the price of admission to watch MacDonald put the local Dean in his place when the ecclesiastical bigwig tries to squash the investigation.

A fairly decent mystery, but definitely not one of Lorac's best. ★★★

First line: You heard that Mrs. Mayden had died?

Last lines: "Aye, and though they say walls have ears, they don't talk, do they, Borwick?" "So much the better," murmured Borwick.