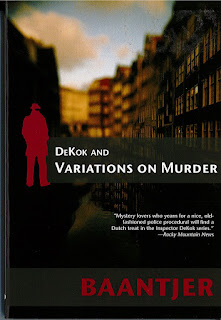 In most cases of suspicious death, the primary question is whodunnit, but Baantjer puts a twist on the murder game and this time the question is: "Where is the body?" Marlies van Haesbergen is an elderly woman living in the penthouse of the building housing a multi-national dredging company owned by Paul Vreeden. She and her husband had long been caretakers for the building and when that position was no longer needed, Vreeden had allowed them to keep their apartment. Even now that her husband is dead, Mrs. van Haesbergen still makes the rounds of the building each night, making sure everything is okay.

Except four days ago, it wasn't. When she entered the company's boardroom, there sat Paul Vreeden...dead. Or so she thought. She rushed off to call for help--but then wasn't certain if she should call a doctor or the police. And maybe she was too hasty and Mr. Vreeden wasn't really dead. So she goes back...and Vreeden is gone. The next morning she makes an excuse to ask for Paul Vreeden in his office and his secretary tells Mrs. van Haesbergen that her boss is out of the country on business and she could make an appointment when he got back. The elderly lady gave it a couple of days and tried again. This time she was told that he had gone from business to a holiday in the Bahamas.

The whole incident doesn't sit well with Mrs. van Haesbergen, so she brings her story to Inspector DeKok. Even though they have no body, DeKok is certain that the lady is right--something has happened to Vreeden and it's not a trip to the Bahamas. He and Vledder (his right-hand man) begin poking around and asking questions....and making someone uneasy. "They" attempt to get DeKok relieved of duties for an illegal entry, but our intrepid inspector wriggles out from under that accusation. Then dead bodies do start appearing--Mrs. Vledder is strangled, the not-too-bright Archie Benson (who comes in handy for crooks who need an assistant who won't think up too many questions) dies, and so do a couple more--but they still haven't found Paul Vreeden--alive or dead. But then DeKok has an idea based on one particular fact learned during the course of the investigation. If he can use it to his advantage, the villains of the piece will lead him straight to Vreeden's body....

The opening scene between Archie Benson and the unnamed man is gold. I've always enjoyed the DeKok mysteries I've come across, but this beginning chapter definitely grabbed hold and drew me right in. Poor Archie can't see what is plain to the reader...that unnamed man is not happy and means Archie no good.

Archibald Benson should have listened more carefully to the words of the other man. Maybe he was on overload or distracted. He followed the man outside obediently, head bowed. It was the last mistake he would make.

And that's the last we hear of Benson until the bodies start showing up.

DeKok is an older detective, resistant of new methods and prefers to stick to the tried and true ways he's always known. He'll never see promotion, but he also won't be fired because his ways, unorthodox as they may be, always gets results. His character and his interactions with Vledder and the other characters in the stories are really what makes the books. That and the way Baantjer has of putting a twist on the mystery tropes. Here we have an almost standard inverted mystery. We know Vreeden is dead. We highly suspect that it's Vreeden's body that is in question in the opening scene. But we don't know who the other man is and we don't know exactly how Vreeden has died. And, true to form, Baantjer has an extra shake to give to the puzzle pieces at the end. ★★★★

First line: "Did you bury him?"

Last line: "I must say never before have I so intently wanted to find a corpse."