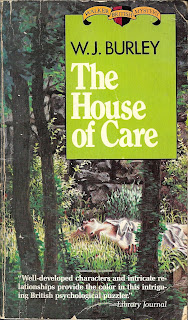 The Care family make their home at Naneslow, their decaying family estate in Cornwall. The family is made up of Sir Henry, his two children by his first wife Deborah--twins Laura and Harold, his second wife Nancy, their son John, Sir Henry's mother Ethel, Henry's sister Isobel, a cousin Celia, and her daughter Alice. Sixteen years ago Deborah fell to her death from a tower on the estate. It was determined to be an accident at the time and the family has let Deborah's memory rest. Until now. Now, Laura has returned from staying with an aunt in Paris and seems determined to rake up the past. She has dabbled in witchcraft and the dark arts and claims to be able self-hypnotize and recall details from that day sixteen years ago which were previously forgotten. And she begins asking pointed questions.

One night Laura goes up to the top of the tower to perform a summoning ritual--to call up a spirit or demon to answer the questions she still has. When morning comes, her body is found at the base of the tower. In the same spot where her mother was found. Part of the summoning ritual involves burning herbs and other materials which may have produced a hallucinogenic effect. Is her death an accident due to disorientation? Or perhaps she committed suicide? Or, most unsettling of all, did someone grow uneasy with Laura's questions about Deborah's death and decide the daughter needed to die as well?

~~~~Spoilers Ahead! Continue at your own risk.

The title (and family name) is really an interesting one given all the unpleasant undercurrents running through the members of the household. The house of Care most definitely does not appear to be a comfortable place to live--not only because it is in such disrepair. In fact the condition of the estate parallels the condition of the family. None of them are easy in their relations with the others and neither Laura nor her mother were nice people, it seems. When Deborah is mentioned, she is always described as creating scenes and manipulating her husband--using his desire for sexual variety against him in ways to taunt and trap him. She deliberately brought Nancy into the family circle to tempt him...which may very well have led to her death.

Laura is described several times as being much like her mother. She certainly likes to use people's weaknesses against them--finding out secrets and dropping hints where it will do the most damage. She has obsessed over her mother's death for years and her purpose in returning from France was to make sure "they" don't get away with it. Unfortunately, it looks like "they" will.

I'm not a huge fan of ambiguous endings to mysteries. I like to see the murderer firmly identified and justice take its course. The final conversation indicates what we are to believe is the solution, but nothing is settled. It makes for an unsatisfactory ending. The atmosphere is superb and the relationships between the characters are well done--if a bit depressing. But that's the effect Burley was going for, I think. Had the wrap-up been more definite and satisfying, I would have given four stars. As it is...★★★

First line: The three women sat around the table in the great bare kitchen with its tall cupboards, its stone sink, and Aga range.

Last lines: Ethel said, "I shall be there." And se added, after a moment, "As usual."

Deaths = 4 (two fell from height; one car accident; one hanged)