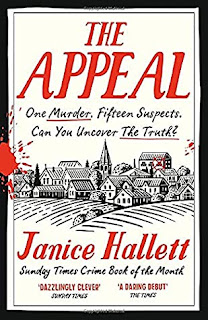 Hallett gives the epistolary story an updated, mystery twist, using emails and instant messaging as the primary source of evidence in this story of murder and intrigue in the small town of Lockwood. Roderick Tanner is convinced that there has been a miscarriage of justice when death occurs among the members of a community theatre group. One member has died and another has been convicted of murder. But he feels like the story which came out at the trial is not "the whole truth and nothing but the truth." He believes he knows what really happened, but he sets the evidence before his two protégés, Charlotte and Femi, to see if they arrive at the same conclusion. Everything they need to know is given primarily in emails and instant messages obtained at the time of the trial. These are supplemented with transcripts of witness and suspect interviews.

Over the course of the book he brings them up to the point of the trial and the law students find do find themselves agreeing that the wrong person is behind bars--but there are still too many options for how things played out. Tanner then provides more information which came to light after the trial was over--this is the evidence upon which he will base the appeal for his client. The legal team fighting for an appeal are confident they can get the sentence reduced to manslaughter, but Tanner wants to argue for the guilt of another party altogether. He needs others to see what he has seen in the documents. Will Charlotte and Femi spot the killer? And will the reader spot him or her before the law students do?

It's difficult to discuss the plot without giving the game away. The interesting hook for this mystery is that we (the reader and the students) pretty much go into the story blind. We are introduced to the cast of characters (suspects and victim) and know only that one of them will die, someone is convicted, and that there is possibly someone else responsible. We also know that a production of the play All My Sons and a shady charity appeal for a little girls medical treatment is involved in some way. Book blurbs usually give us more to go on than that--but as we work our way through the messages we get to know these people and the situations leading up to the murder. It's up to us to spot the clues in what's said and, sometimes more importantly, what's there between the lines.

Everything depends on whose point of view is trustworthy (and to what extent) and understanding that a great deal of what is said in these messages may have more than one interpretation. Some readers may think that we're given a lot of fluff--gossip, trivia, etc.--in these emails, but appearances aren't always what they seem and a random comment may prove very important indeed. This is a fantastic updating of the epistolary story--very reminiscent of Sayers' The Documents in the Case. My primary difficulty was keeping everybody straight--there are a lot of characters to keep track of. ★★★★ and 1/2

First line: As discussed, it is best you know nothing before read the enclosed.

Last line: There's nothing as exciting as a fresh new start when the page is blank and the future is all for the making!

Deaths =  one fell from height

I read 2 epistolary stories this year, for the first time. I like this mystery sub-genre and will put this novel on my tbr list.