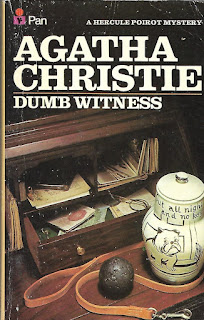 Dumb Witness or (as both Poirot and Hastings mention at various times) "The Affair of the Dog's Ball" features a case where Poirot loses his client before he even knows she exists. Miss Emily Arundell is a wealthy spinster with nieces and a nephew buzzing round hoping to get a little of Auntie's money before the old girl passes away (because with their luck, she's going to live to be a hundred and they could all use some cash now). She doesn't approve of Theresa and Charles's mode of living--living beyond their means, that is. And she doesn't approve of Bella's choice in husbands. Whatever could she have been thinking to marry a Greek? But--if they can all be patient, they will have equal shares in the dibs once Miss Arundell dies. Or at least that's what she's told them will happen under her current will.

When they all gather at Littlegreen House (the Arundell's family home) for Easter, Miss Arundell takes a nasty fall down the staircase late one night. The ball which belongs to Bob, her terrier, is found nearby and it looks like he must have left the toy at the head of the stairs after a round of his favorite game--bumping it down the stairs to a playmate willing to toss it back up to him. They all assume that slipping on it caused her to tumble down. Fortunately, she is not seriously hurt, merely battered and bruised, but it does force her to lie in bed for some time. While she is resting, she begins to consider the circumstances of her accident and decides that someone needs to investigate. She remembers a friend mentioning a certain Hercule Poirot and she decides to write him a letter. This is April 17th.

Unfortunately, the letter is delayed and Poirot does not receive it until the end of June. When he and Hastings arrive in Market Basing to call upon Miss Arundell, they find that she has recently died--apparently of a recurrence of jaundice, an ailment she had successfully endured in the past. And--to the surprise of everyone--she had signed a new will just days before her death which disinherited her family and left everything to her companion Wilhemina  Lawson. All of Poirot's instincts are on the alert and he determines to get to the bottom things. It starts with the simple questions of why was the letter not posted immediately and why was the will suddenly changed, and by the time he has interviewed all of the family and servants he is convinced that the fall down the stairs was no accident and Miss Arundell's death was not as natural as it appears.

Another enjoyable mystery by one of the Queens of Crime. I had read it before (long before blogging) and it's one of the few* of hers where I remembered who did it. But that didn't lessen my enjoyment. I think the set-up with Poirot having a dead woman as a client is an interesting one and I had fun watching Hastings go through all sorts of convoluted solutions before Poirot reveals all at the end. Also, being a dog lover, I found the scenes with Bob--particularly when Hastings is on the scene--to be quite fun. The running monologue of what's going through Bob's head while he barks at and sniffs the two men is quite amusing. And Poirot's explanation of why dogs are very logical in their dislike of mailmen was very nice as well. 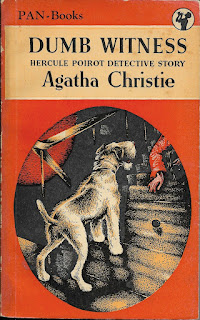 For those who say that Christie had cardboard characters, I can only reply that her thumbnail sketches of each character in Dumb Witness is spot on and I can vividly imagine them all--from Minnie Lawson, the fluttery hen of a companion, to the scapegrace nephew Charles to the gossipy Miss Peabody (and everyone in between). Even the listless girl in the house agent's office springs to life as she makes every effort to be as unhelpful as possible to potential buyers. Who needs pages of character descriptions when Christie can introduce characters in a brief scene or two and give you all you need to know? ★★★★

*Not counting "big" ones like And Then There Were None, Murder on the Orient Express, The Murder of Roger Ackroyd, etc. where once you know who did it, it's pretty impossible to forget the solution.

There is one piece of advice i offer to all my readers. Never take a soldier to a military play, a sailor to a naval play, a Scotsman to a Scottish play, a detective to a thriller--and an actor to any play whatsoever! The shower of destructive criticism in each case is somewhat devastating. (p. 201)