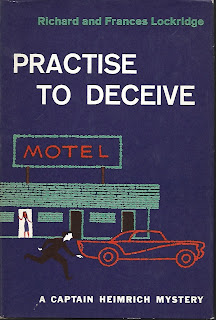 Captain Heimrich is on the case again when wealthy "old" woman (42!) is stabbed to death in a motel. Heimrich's lady-love, Susan Faye, is asked to visit the Senley mansion--bringing fabric samples for a redecoration project. Hurricane Doris is playing havoc with the weather and when Susan's appointment is changed to Friday night, she finds herself stranded between the washed out bridge leading onto the Senley property and the road home with water too deep to drive through. There is nothing for it but to stop for the night at the Crescent Court Motel.

Susan usually travels with her Great Dane, Colonel, and when Colonel begins barking in the middle of the night Susan knows something isn't right. She looks out into night to see a figure running away from the motel and an open doorway a few rooms down from hers. Inside is Mrs. Senley, her prospective client, but Mrs. Senley is a prospective client no more. She is dead from a stab wound to the heart.

Heimrich and Sergeant Forniss arrive and they find that the fact that Mrs. Senley and Susan were both at the hotel was not the only oddity of the night. Mrs. Senley is currently on husband number three (a much younger man, this time). He was caught at home--on the other side of the washed-out bridge. But husbands number one and two were also at the Crescent Court Motel and each claim to have received a note from Olive Senley requesting their presence at the motel. Are they both telling the truth? Did one arrange for the other's presence as a red herring for the police? Or perhaps they both have been brought along as cover for the mysterious Mr. X? When another body is found drowned in the swollen stream nearby, Heimrich has cause to review the facts of the case...and to remember on particular statement made early in the investigation.

I have to say that I found this one most enjoyable in its descriptions of the weather and how it affected the story as well as the description of the characters involved. The mystery itself really wasn't all that mysterious. There's only one solid motive to be had and it seemed pretty obvious that the Lockridges were relying on the readers to believe that just because something was supposed to be impossible...well, then it must have been impossible and so we'd try to fix one of the other suspects up as murderer. I didn't know precisely how our killer got round the impossibility, but it was apparent they must have since they were the only credible suspect. Heimrich's reconstruction of the "how" is good--even though there's little chance of proving his theory. We're left wondering at the end whether the prosecution's case is going to be solid enough to bring in a verdict of guilty. Overall, a solid read--though not one of the absolute best Heimrich books. ★★★

First line: Ann, born prematurely in late June, had blown herself out in the Gulf of Mexico, a fretful baby of a hurricane.

Deaths = 2 (one stabbed; one drowned)