The River & the Rose 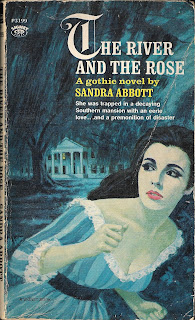 Set in about 1899 in Georgia: Four years after her fiancé dies in a freak carriage versus train accident, Suzanne Howe answers an advertisement for "a young lady of good character for a position with a Southern family." Her beloved Aaron had been from the South and she thought she would be closer to his memory there. She has visions of beautiful plantations and people of quiet Southern manners and charm. What she gets is a ramshackle mansion--dusty and falling into disrepair, a butler who is downright rude, and a housekeeper who is by turns cold and aloof and then warm and welcoming. Andrew Parker, the master of the house, is a dark, brooding sort who both repels and attracts Suzanne.

But looming over Belle Rose (the name of our gothic plantation) are dark secrets. Who is the woman crying hysterically in the room next to Suzanne? Is she the same woman who wanders through the woods and fields at night? Why don't the townspeople want to come to Belle Rose? And why won't the doctor and his wife help Suzanne when she thinks she wants to leave the plantation? Andrew finally answers her questions about the strange things that have been happening--but can she really believe him? When someone winds up murdered one fateful night and Suzanne finds Andrew standing over the body, will she discover that she's fallen in love with a killer?

So...this is a bizarre little book. Literally--it's a bare 128 pages in length and this story needs more than that. Sometimes a book moves quickly because it's exciting and you keep turning pages to find out what happened. Not here. Everything just happens too fast. There is a whirlwind of strange crying, sightings of the weird woman, Suzanne having fainting fits and a fever, Andrew telling her he loves her. they kiss a lot for two people who've just met but then immediately she's fearful of him, and he's off in a brooding fit of anger.  There's no real build up at all. And then there's a whole other storyline about a dreadful event that happened at the end of the Civil War. It's all too much in too few pages. I got to the end of the story and just felt like "What just happened?!" And, seriously girl, if a guy swings from tenderness to shouting anger like that...he's got issues that need resolved before you go tumbling into his arms. ★ and 1/2

First line (Prologue): We were dancing.

First line (Chapter One): The late July afternoon heat was sweltering, and by the time the train reached Parker's Junction my clothes were sticking to me

Last line: When the last stone was thrown, the stallion reared its head and galloped off into the night.

Deaths: 5 (one hit by train; one shot; one stabbed; one killed in a fire; one hit by chandelier)