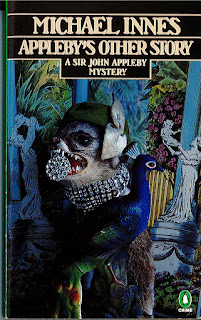 Sir John Appleby may have retired as Commissioner of the Metropolitan Police but that doesn't mean he doesn't still get pulled into mysteries now and again. When his friend Colonel Pride, a local Chief Constable, invites Appleby to join him in a visit to Elvedon Court, he suspects that Pride is angling to get him to look into a little matter of art theft which occurred two years ago. After all, Appleby has had a bit of success in that area. But he isn't expecting to find the courtyard full of police cars when they arrive.

It seems that Maurice Tytherton, the owner of Elvedon Court, has been shot in cold blood right in front of his prize Goya. Appleby is inclined to let the local constabulary get on with the job despite Pride's invitation to take a hand, but then he spies an old acquaintance among the house guests--one Egon Raffaello, well-known shady art dealer. And his curiosity gets the better of him. Perhaps Tytherton's death has something to do with paintings. If so, how does the two-year old theft figure in the picture?

Of course, there are other motives lurking about as well. Tytherton's son Mark, who has been in Argentina for years, has just returned home in time to have an argument with his father. Mark's cousin Archie Tytherton also had a huge quarrel with his uncle the evening of the murder and there are rumors that the elder Tytherton had mentioned changing his will--an intention he was prevented from making a fact. The house is also full of people with all sorts of sexual motives from Maurice's disappointed "lady friend" to his wife's lover to his wife herself. In addition, there's Ramsdon the overly efficient secretary and Miss Kentwell who claims to be on the hunt for charitable donations, but whom Appleby suspects of being a hunter of a different sort. The place is absolutely bulging with suspects--even the butler may have done it.

The mystery is slight and the investigation is done almost entirely through conversation, but the characters are memorable--especially Mark Tytherton, Raffaello, and the Catmulls (our butler and cook). There is also a rather ingenious alibi method that when broken manages to explain how a man could be dead before he was found to be dead. It all makes for an entertaining and enjoyable read. ★★★ and 1/2.

Last line: He turned away, left the roof, and descended--rather slowly--through the several stories of Elvedon Court.