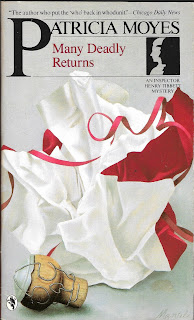 Many Deadly Returns (Who Saw Her Die?; 1970) by Patricia Moyes

The eccentric Lady Crystal Balaclava, the once prominent socialite of the Roaring Twenties, is convinced that someone means to kill her. She calls on influential beaus from her days as a Bright Young Thing to pressure Scotland Yard to send Inspector Henry Tibbett to watch over her birthday celebration. Henry and Emmy are invited for the annual "ritual"--all three of Crystals daughters come home (with husbands in tow) to celebrate. And like the three wise men, they come bearing symbolic gifts. Beautiful, prize-winning roses grown by Violet's husband; the best champagne, brought by Daffodil and Chuck; and Primrose with a cake provided by the famous Bonnet's of Switzerland. And each of these ladies has a vested interest in mama's death--once Crystal is gone, the girls with the floral names will each inherit a third of their father's fortune. The only person in the household with no apparent motive is Dolly Underwood-Threep, Lady Balaclava's companion and general dogsbody.

To prevent any shenanigans with any of the gifts, Crystal has everyone smell the roses and insists that Henry drink from her champagne glass and take a bite of her special marzipan cake topper before she does. And then she promptly keels over dead from an apparent poisoning--under the nose of the Yard's finest. Tibbett works with the local police team to begin the investigation, only to have the post mortem reveal that Lady Balaclava apparently died from...natural causes?! Tibbett doesn't believe it and neither does the local doctor who was first on the scene. Together, they will have to find out how a murderer could kill without leaving a trace of the agent used in the victim's body. Untraceable South American poisons need not apply...

I normally enjoy Moyes's mysteries quite a bit, but, for whatever reason, I just didn't hit it off with this one. Not for lack of interesting characters--Lady Crystal Balaclava is fascinatingly bizarre and I quite liked her gruff, rough-edged companion Dolly Underwood-Threep. The three daughters and their husbands are well-drawn and add much to the story. But the story itself just isn't all that entertaining. Henry and Emmy Tibbett seem like muted versions of themselves. And one would expect that a murder mystery with an unknown and unique method of doing away with the victim would instantly grab the attention. But the investigation is drawn-out and, since Tibbett must act unofficially, has none of the usual police activities or official urgency of the usual police procedural.

Spoiler Ahead!--Murder method (which is a fairly big secret until the very end) revealed. Don't read if you want to remain mystified as long as possible...

The most interesting part of the entire thing for me was the afterword which explains that the basis for the plot was founded in fact. The real life incident wasn't a case of attempted murder (at least no one suspected it, if it was...), but none-the-less it proved that death via the method was definitely possible--providing Moyes with a very unique murder method. It certainly is the first time I've ever come across death by allergic reaction to an antibiotic plant spray. ★★  and 3/4

First line: It was not a large apartment, but it was full of sunshine and furnished with slightly austere good taste, and its big picture window looked out over a sweeping view across Lake Geneva to the mountains beyond.

Last line: They have much pleasure in accepting, and will bring no flowers, by request.