The Witch of the Low Tide 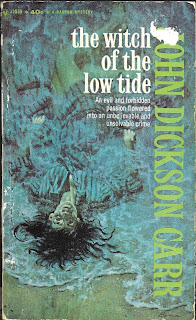 But she was strangled to death. And the murder had to leave after he had killed. He's not here now. But in some fashion, explain it how you like, he or she or some damnable witch of the low tide managed to leave without a footprint in all that wet sand. ~Dr. David Garth in The Witch of the Low Tide (1961) by John Dickson Carr

Set in 1907 England. Dr. David Garth, middle-aged medical man, has fallen in love with a young widow, Lady "Betty" Calder. He has been reluctant to let his friends know that the "confirmed bachelor" has become susceptible to Cupid's darts--but events outside his control lead to sudden revelations. For Inspector Twigg of Scotland Yard is on Betty's trail--claiming that she is woman of low-repute and a blackmailer in the bargain and Garth is determined to prove Betty innocent. We soon discover that Betty has a sister named Glynis who has taken to dressing like Betty and even going about under her name.

When Glynis is found dead in Betty's own bathing pavilion, Garth's lady-love is the primary suspect. After all, we only have Betty's word that Glynis is the woman behind the blackmail. But, given the fact that there were no footprints on the surrounding sand, Twigg is hard-pressed to prove how Betty did it. Garth uses his knowledge of the up-and-coming practice of psychoanalysis and detective literature to solve the questions of who and how...and save his lady from the hangman.

This is another historical mystery by the king of locked rooms and impossible crimes. Unfortunately, Carr and his historical mysteries & I don't get along very well. I thoroughly enjoy his Dr. Gideon Fell and Sir Henry Merrivale books, but something about the books that slip into another time period just doesn't work for me. In general, I do like historical mysteries--particularly those set in the Victorian or Edwardian period. This time round, Carr has chosen the latter. I don't know if it's the fact that he needs to pay so much attention to the details of his impossible crimes and has less attention to give to the time period or what. But the time period setting just doesn't feel right. Certainly, it's somewhat necessary for Carr to set his story earlier than when he was writing. After all, the little private bathing pavilions (changing rooms) are very much of the time period and the fact that there is one on the beach for our victim to be murdered in is kind of important to the plot. 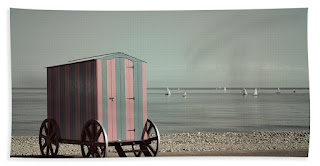 Swimmers of the 1960s weren't nearly as concerned with modesty and didn't need these private bathing "machines" when they ventured to the beach.

The antagonism between Garth and Twigg was fairly well-played--especially at first. It did drag on a bit, though. And, for Garth supposedly being able to analyze character so well, you'd think it would have twigged (yes, I went there) the inspector's commitment to finding the truth (and not just wanting to pin it on Betty) a lot sooner.

A decent impossible crime (two, actually!) but I have to say I prefer Carr's series books to his stand-alones. ★★★

This has also been reviewed by Aidan at Mysteries Ahoy!

First line: The train reached Charing Cross towards dusk of a fine evening in June.

Last lines: You might offer me that cigarette-case again, Doctor. You're not so bad yourself.