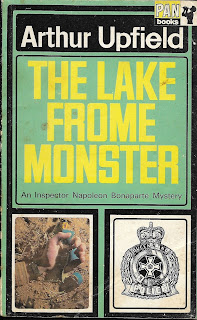 Eric Maidstone was a teacher on holiday. He headed to the outback to take pictures of Australian animals for free-lance articles he submitted in his spare time. He planned his travels to take him to the Lake Frome station where an acquaintance worked. But he never got there.

His body was found with a bullet hole in the chest near the Bore Ten watering hole--just west of the dingo-proof Fence. Before those who found him turned his body over, they thought he might have tangled with The Lake Frome Monster, a giant-sized rogue camel known to attack men. The police from the nearest town get nowhere with their investigations and so the force sends its best: Inspector Napoleon "Bony" Bonaparte.

A half-white, half-Aboriginal detective, Bony is an expert at tracking and reading the ways of the outback. He often goes undercover as a worker in the bush in order to win the confidence of those he is investigating. He does so again. This time tackling the worst stretch of Fence work--clearing brush, mending broken fence, replacing rotten posts. But even his skills are put to the test when he finds that a wind storm has covered the ground with sand and debris. Most of the clues will come from conversations with various witnesses and suspects--from overseers to station owners to his fellow Fence minders. Eventually, a pattern emerges and he's forced to set a trap to catch the killer/s. When it's sprung a bit too soon and his own life is in danger, help comes from a very unlikely source...allowing Bony to once more get his man.

This is the last entry in the Inspector Bonaparte mysteries. It was completed by J. L. Price & Dorothy Strange. They did a credible job of finishing the work, but I could definitely tell that other cooks had been in the kitchen--the dish served up had a slightly different flavor. Bony's character lacks some of the depth that you find in the earlier works. The basic plot is a good one and the mystery is fledge out pretty well, though the ending is a bit abrupt. Overall, a solid ending to the series. ★★★

First line: The wildfowl in the trees round the lake rose in a flurry of alarm with the shot.

As had happened to him so many times before, the most vital parts of a conversation had never been given to him on his first interview with someone who could possibly help. The really significant things, he reflected, were passed over because they seemed unimportant. (p.p. 123-4)

Last line: "To the finest Fence in the outback, coupled with the name of the Lake Frome Monster!"