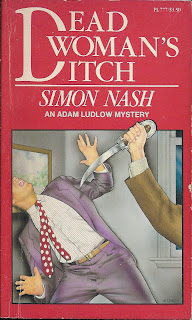 Dead Woman's Ditch (1964) by Simon Nash finds us at an obscure little country inn at what should be the tail-end of the holiday season. Oddly enough, the inn is packed with guests and none of them seem to be in the holiday mood. They all eye one another suspiciously and what attempts there are at small talk quickly fall flat. Among the guests and staff we have the young novelist Joan Forest, the most stand-offish Silas Taker, the former sea captain George Hughes, the stockbroker's wife Mrs. Trask, the academic language specialist Dr. Amethyst, the civil servant John Croydon, the self-contained accountant Egbert Weeldon, the very frightened waiter Sebastian Munoz-Diaz, and the very happy innkeeper, Mr. Cannock.

They have barely settled in on their first night when Taker is found murdered in his room--stabbed to death with one of a pair of ornamental knives displayed downstairs in the hotel. The local police quickly admit that murder is a bit out of their depth and so the Yard's Inspector Montero and Sergeant Springer are on the scene early. He decides that this is just the sort of case that his academic friend Adam Ludlow be able to contribute to (especially since a fellow academic is among the suspects) and convinces Ludlow to take a late holiday himself. The trio uncover a blackmail plot--it appears that the nasty Mr. Taker had summoned his victims to the inn in order to squeeze them dry and every other guest had reason to want him dead. Even the innkeeper was in his evil clutches.

But blackmail isn't the only crime going. There are also connections to a politically extreme group who recruits members using various means. There are clues pointing to the group and there is also the little matter of the missing photograph. Why on earth was the blown-up photo of the inn (which was hung above the bar) removed? What incriminating detail could there have been? Once they know that, they will be well on their way to solving the crime.

Oh, and you may be wondering what Dead Woman's Ditch has to do with it all. Well...it's a handy place for dropping bits of inconvenient evidence. It's a pity (for the criminal) that Ludlow is such an inquisitive fellow when it comes to ditches and how they got their names and just where they are...

This is the fourth of five mysteries featuring academic Ludlow and Montero--but it was the last one left for me to read. Nash is the pen name used by Raymond Chapman, Emeritus Professor of English at London University and an Anglican priest, for five mystery novels published in the 1960s. Professor Chapman worked as a non-stipendiary priest in Southwark, and is currently on the staff at St Mary's Barnes in Southwest London. His police detectives are Inspector Montero and Sergeant Jack Springer, unofficially aided by the gifted amateur and lecturer at North London College, Ludlow. Chapman has also written many books on religious themes and English literature. For more information on Nash/Chapman check out gadetection.  I owe Jon (author of the post) a great debt--previously when I went searching for information on Nash, there was pretty much nothing to be found.  Jon  did his own bit of detective work and tracked Chapman to his current post at St. Mary's.

As anyone who knows me or my blog at all well, I do love a mystery with an academic slant and this one has two--as amateur sleuth and as suspect. Ludlow is an understated character, perhaps just a shade too much so, but it was interesting to watch him try to infiltrate the political organization's headquarters in London. I did spot the villain of the piece, but I didn't get the motive exactly right. A satisfying, solid mystery. ★★★

First line: It was still early enough in the year to leave the curtains open at dinner, but late enough for twilight to come pressing up to the windows before the meal was over.

Last line: As for that piece of research which Montero's telegram had interrupted, it really looked as if it would never be finished.

Deaths =  2 (one stabbed; one strangled)