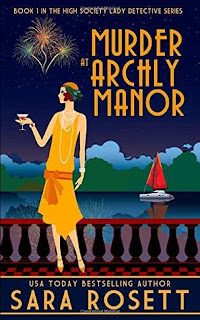 Miss Olive Belgrave is in need of a job--her immediate family isn't terribly well-to-do, the money her mother left her has been lost in bad investments (under her father's management), and her father seems to be spending what money he has on her step-mama. So Olive takes a leaf out of Tommy and Tuppence Beresford's book* (Agatha Christie's The Secret Adversary) and comes up with an unconventional occupation. When she discovers that nobody really wants to hire a (much too pretty) gentlewoman in reduced circumstances to be a governess or a maid or even a society reporter, Olive jumps at the chance to become an investigator. Olive's cousin Violet has fallen madly in love and gotten herself engaged to a man about whom little is known. Her aunt and other cousin Gwen, offer to pay her to delve into Alfred's mysterious past to see if he's a suitable husband for Violet.

But finding anything definite out about Alfred Eton proves difficult. He claims to be an orphan with absolutely no relatives who has recently arrived from India. His father apparently served as a clerk of some sort out there and both his parents were killed in a accident. His godfather, Sebastian Blakely, had invited him to England and Alfred has few established friends (and none very close).

Gwen manages to wangle an invitation for Olive to Sebastian's big Silver and Gold party where the newly-minted detective hopes to get her host to reveal some tidbits about his godson. But before she has a chance, Alfred plunges to his death while watching fireworks from a balcony. Olive witnessed the fall and caught a glimpse of a woman with blonde hair up on the balcony as well. Violet has bobbed blonde hair--and she was heard arguing with her fiance earlier in the evening. It becomes obvious that the local police suspect Violet of having, at the very least, renewed the argument and shoved Alfred a little too hard. Olive is just as certain that Violet did not kill Alfred and she has to redouble her detective efforts to uncover the true culprit.

This is an enjoyable beginning to a new historical series. I am a fan of Golden Age crime fiction, so the 1920s setting is perfect for me. Olive is charming and intelligent and one has to admire her resourcefulness. She is a lively character who makes does good work on her first outing as a detective and Rosett wisely shows her as having flaws. Olive initially lands on the wrong culprit--nearly causing another death, but recovers from her mistake in time to rescue the intended victim.  I don't have much good to say about her father. I really don't have a lot of respect for parents who abandon their children completely in favor of new wife/husband. Olive's father lets the new woman run roughshod over him--dictating his rest periods and how he spends them, redecorating everything (apparently there's no problem with money for that...), and allowing her to be on a mission to remove every trace of Olive's mother and force Olive out of the house as soon as possible (if not sooner). Fortunately, Olive is up to the challenge of finding her own way in the world.

The mystery is well-developed and entertaining with enough red herrings to keep the reader guessing. I would definitely recommend it to those who enjoy historical mysteries with a slightly cozy feel. ★★★★

*Having read the author's afterward, I'm quite certain that Olive is patterned, at least in part, after Tommy and Tuppence. Rosett tells us that she read a number of early Christie novels, including The Secret Adversary, as part of her research during the writing of the book.

First lines: I didn't intend to become a lady detective, but when one's relative is swept into a police investigation and the outcome looks rather grim--well, one cant's stand aside. One must do something.

Last lines: I closed the paper with a swell of satisfaction. I couldn't wait to see who replied.

Deaths = one fell from height