A Death in the Small Hours 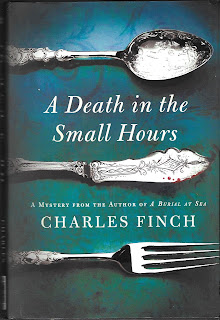 A Death in the Small Hours (2012) by Charles Finch

Charles Lenox had made great progress in his Parliamentary career--this sixth book in the series finds him preparing for the great honor of giving the opening speech to begin the newest session of Parliament. But he finds himself inundated with visits by his fellow members and it begins to look like he'll never get a moment's peace to write his speech. Fortunately, his uncle, Frederick Ponsonby, has sent a message inviting Charles and his family to his house in the quiet village of Plumbley. There's a small matter of disturbing vandalism going on and he hopes that Charles will be able to spare a bit of time to investigate. Things soon become more serious and Charles finds himself investigating the murder of a young constable in the wee hours of the night. What do the symbols left from the vandals mean? And what about the cryptic message found on Weston's body? Whose horses were tied up in the woods? And why did the vandals find it necessary to kill the young policeman? Once Charles can answer these questions, he'll be able to put a name to the killer.

Finch gives readers another delightful Victorian mystery. This one has plenty of twists and turns and interesting undercurrents running through the small village and countryside. I was pleased to know that I had spotted part of one of the twists. I noticed that [redacted] was acting a bit oddly and thought they might be involved in some way--but I definitely didn't expect the extent of their involvement. Kudos to Finch for keeping me guessing. I also enjoyed Finch being more actively involved in the detection this time around, though I must repeat my earlier complaint about time spent on his Parliament business. I honestly don't care for him being split in his activities and if the mysteries don't particularly involve Parliament or government officials then I don't see the point of dragging him into politics or, rather, dragging the politics into his stories. I applaud the character's interest in the poor and highlighting their conditions, but considering the story as a piece of detective fiction--the condition of the poor has no relevance whatsoever to the mystery involved. The man is a gifted investigator; I wish we could just let him get on with the job he's good at.

But the mystery is a good one and makes for a quite enjoyable read. ★★★ and 1/2

First line: Charles Lenox sat in the study of his town house in Hampden Lane--that small shop-lined street just off Grovesnor Place where had passed most of his adult life--and sifted through the papers that had accumulated upon his desk, as they would, inevitably, when one became a member of Parliament.

Last line: Indeed, the whole party had by now already begun to turn back, smiling, laughing, and in Jane's case, rather exasperated: making together for the warmth of home.

Deaths = 3 (one fell from height; one stabbed; one shot)