A Stranger in Mayfair 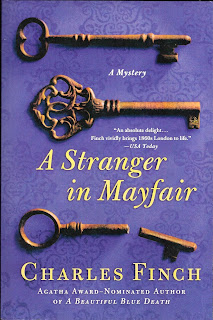 A Stranger in Mayfair (2010) by Charles Finch

At the end of the previous book Charles Lenox is elected to Parliament. This book finds him trying to strike a balance between his new job in the House of Commons and his detective work. Just as he's settling into his new role, Ludovic Starling, a fellow member of the House, asks Lenox to investigate the murder of his footman Frederick Clarke in the alley behind Starling's house. Someone struck the young man down from behind, using a brick from the alley's paving to deliver the killing blow.

Lenox insists that he's too busy getting ready for his maiden session in Parliament, but agrees to take a quick look at things before handing the case over to his assistant John Dallinger. He can't keep from thinking about the murder though and when Starling suddenly insists that he no longer needs Lenox, the detective's interest is doubled. The two detectives soon discover that the footman was leading a double life--as a member of an exclusive boxing club and the recipient of mysterious packets of money. The trail leads from boxing clubs to butcher shops. A second (unsuccessful) attack occurs and someone is arrested for the crimes. But Lenox is convinced that someone is covering for the real killer. But who? And why?

Spoiler Ahead! (second paragraph down)

I have to say that this one disappointed me. One reads mysteries with the expectation that the detective will detect. Dallinger is fine--but he's no Lenox. And Lenox is distracted--having him split his time between Parliament and detecting really doesn't work for me. And then, of course, he isn't distracted enough by trying to do two jobs at once. We've got to throw in this weird not-communicating-properly thing with his new wife. It's not like they have known each other since they were children and have been best friends all this time or anything....so naturally they're being all weird now that they're married.

I was also a little mystified about the whole gentleman's boxing club thing. I mean, it seems rather a long way to go just to have a red herring to throw in and then it didn't seem to serve all that well as a false. Lenox barely pays attention to it, save for one visit to the gym, and I never got the idea that he thought a boxer might have slugged Frederick over the head. I honestly expected there to be some real reason for Frederick's involvement in the boxing club and that it would figure more prominently in the solution. With the boxing thing being such a dud, it was pretty obvious who was behind it (especially after we learn about Frederick's other secret...).

My primary reason for giving this three stars rather than less is my fondness for the characters. I enjoy Lenox's relationship with Graham (reminding me of Wimsey and Bunter) and his relationship with Dallinger (despite his protégé not being up to snuff in the detecting department). There are also good moments with his brother Edward and the description of the opening of Parliament is quite interesting (even if I do wish Lenox were just detecting). I hope the next installment will see more detective work on display and less of the extraneous material--these are billed as mysteries, after all. ★★★

First line (Prologue): Clara, who is that gentleman? He looks familiar.

First line (Chapter One): For an Englishman, it was a strange time to be in France.

Last line: From her he looked out into the chamber, and with a clear, confident voice, began to speak.