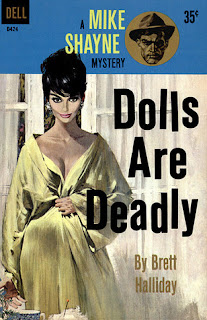 Dolls Are Deadly (1960) by Brett Halliday

Dolls are deadly. Especially when they are voodoo dolls sent to threaten. But what connection could there be between a small-time gangster ("enforcer") and a fantastically beautiful housewife that would result in them both being sent voodoo dolls? Henry "Henny" Henlein, an enforcer who hired out as a muscleman for Miami's crime bosses (and most particularly De Luca), has received two dolls--one stabbed to the heart with a black pin and the other with a noose around its neck--and he is scared to death. He comes to Mike Shayne and asks the detective to find out who's behind it. But Shayne wants no part of Henny's dirty money. He turns the tough down flat and decides to go fishing instead.

Instead of the relaxation he expects on his friend Sylvester's boat, he encounters of trio of odd vacationers. Shayne can't quite put his finger on what's wrong, but all his instincts tell him the three men are up to no good. A strange exchange of fish with a Cuban boat, a brand new boat motor, and a matter of no ice are just a few of the little oddities that put him on the alert. And then people start dying...First Henny is found shot to death. Then Sylvester comes up missing and Shayne suspects that the little Cuban has been put out of the way as well. (He is, of course, right.)

Next up is Clarissa Milford. She has also received one of the little voodoo dolls with a pin in its heart.But what connection could she have to a mobster's hunk of muscle? It winds up that all dolls lead to Madame Swoboda--a medium who puts on seances for the tourists, as well as selling voodoo dolls, conjure candles, and love potions. Clarissa's husband, sister, and brother-in-law have all become devotees of the mysterious madame. Clarissa fears that they're being hustled (though she doesn't quite know how) and has threatened Madame Swoboda with the police. Has the madame used her voodoo doll to threaten Clarissa in return? Or is someone else using the medium's black magic for their own ends? Shayne believes there's something bigger at stake than just a few psychic shekels. (He is, of course, right about that too.)

One thing I like about the Mike Shayne books is that they are more like classic mysteries than most hard-boiled private detective novels.Sure, we've got loan sharks and enforcers and shady dames--but Halliday also gives us a nice little puzzle to work out to go along with the tough guy backgrounds. This one is little bit leaner in the clue department, but it's still possible to find the bare bones of the plot. Or I should say two plots since there are two mysteries to solve here. I was half-way there. I got one of the solutions, but fell down on the job on the second. Or Halliday fooled me. One of the those. Another solid outing with the red haired detective.  ★★★ and a half.

First line: Michael Shayne stared dreamily from his office window, his chair in a nearly impossible tilt and his big feet scuffing the desk top.

There was sardonic humor in the idea of a professional killer trying to hire a detective to protect him against the sender of a couple of tiny dolls. (p. 13)

Last line: She seemed to hear him then, and for the first time since he had met her, she smiled.

Another good tale about voodoo dolls is The Secret of High Eldersham by Miles Burton (1931), a Mystery League title; in which the locals have taken up witchcraft and go all in for secret ceremonies in the woods, where they use a mommet (poppet) doll to inflict injury and misery to various persons.

Perfectly appropriate for a Halloween read. :-)