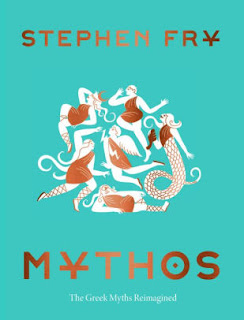 This is a modern retelling of Greek myths--from Chaos to Ouranos & Gaia (the primordial gods) to Kronos & the Titans to Zeus & the Olympians to their dealings with mortals. Stephen Fry gives us the foundation of Greek mythology and then attempts to weave all of the stories that follow into a single narrative. He imagines dialogue between the gods in the language of today in an effort to make the myths more accessible to modern readers.

It would be impossible to give a synopsis of the book without detailing every story along the way--and, well, that's what the book is for. It had been quite a long time (7th grade!) since I had thought about most of these myths in any detail. I have to say that while I looked forward to reading this with great anticipation--I love Stephen Fry, this really wasn't quite as entertaining as I had hoped. I think Fry's idea of telling the stories of the Greek gods as a running narrative and connecting the various incidents to each other was a good one. But it wasn't executed as well as it might have been. The introductory chapters which give all the background on how everything came from Chaos through the dawn of Zeus and the Olympians was a bit of slog--well, to be honest, pretty tedious. And then when he began the stories of all the gods the style became very repetitive. I definitely grew tired of his technique of introducing a new character in a throw-away line (or sometimes a throw-away paragraph) and then saying, "But more about god X later..." Every. Single. Time. Stephen Fry is a smart man. Surely to goodness he could have come up with more variation in the how-to-introduce-a-character line.

I did appreciate his sense of humor and the ways he interpreted some of the gods' intentions and actions. British humor is perhaps an acquired taste and may not be for everyone, but it suits me just fine. It was also nice to reacquaint myself with stories that I hadn't read since junior high school and surprising to realize how little I had forgotten about the portions of Greek mythology we had covered. Of course, we didn't examine the material in such great detail as Fry does here, so I also became acquainted with some figures that were new to me. That was enjoyable as well. ★★★ and 1/2.

First line: These days the origin of the universe is explained by proposing a Big Bang, a simple event that instantly brought into being all the matter from which everything and everyone is made.

I was lucky enough to catch Steven Fry in 2019 at the Niagara on the
Lake theatre. He was doing Heroes, the second in his series about
Greek mythology and it was just amazing. He did three separate shows
in a row just as though he were telling the stories. My husband and
I were astounded at the sheer memory ability of the man, and it was
interesting enough to amuse my husband! I loved it.

I think he's amazing in interviews, etc. Maybe I should have listened to him read the book--I've seen several people raving about the audio version.