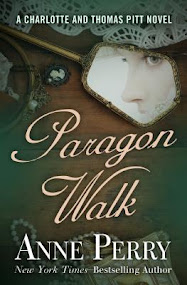 Murder strikes the upper classes again and Inspector Thomas Pitt is assigned to the case. Which, of course, means that his wife Charlotte and her sister Emily (Lady Ashworth) will also be sleuthing among soirees and afternoon teas. This time it's a case of murder and rape when innocent Fanny Nash is killed in Paragon Walk. Described by Emily as "too innocuous to arouse passion," it's hard to believe any man felt strongly enough to attack and kill the young woman. But her death proves otherwise. Every man in the neighborhood is suspect--from footman to Pitt's brother-in-law Lord Ashworth himself--until they can provide verification of their whereabouts at the fatal hour.

Pitt interviews all of the inhabitants of Paragon Walk and finds that nearly all of the servants can provide proof of their activities...but most of their masters can't. They all say where they were, but each has moments that are unsubstantiated and nearly all had a window of opportunity when they could have done the deed. Charlotte and Emily start their amateur investigations in an effort to help clear Emily's husband and soon discover a thread of evil which affects everyone on the Walk. When someone is found hanged with an apparent suicide note confession, you would think that everyone would breathe easier knowing the killer had been revealed. But the tension remains and Charlotte suspects that there is more to the story than they know.

This particular Charlotte and Thomas Pitt novel falls a little short of the mark. Our good inspector really doesn't detect much and after about the half-way mark all but disappears--except to re-interview everyone after the second murder is discovered. I would really like to see Perry give him more to do than just interview people and be insulted by the gentry because he's a policeman (and little better than a tradesman).There is also a supposed clue given early on that could have been worked into the solution quite nicely, but it seems that it was just filler or a somewhat pink herring. It can't be called a proper red herring--it's dropped almost casually into the narrative and then forgotten save for a brief musing by Charlotte in a later chapter (but that leads nowhere). Had that clue actually led anywhere important, it could have been quite interesting. The motives given for the rape and the murders really don't convince me and the plot doesn't gel nearly as well as the previous two novels. 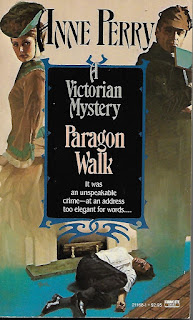 What carries the book is the relationship between Charlotte and Emily and the introduction of Ashworth's Aunt Vespasia. She is a delightful character who deserves to appear again and again, though I doubt she will since she's supposedly just visiting. I could see Aunt Vespasia and Charlotte becoming great friends--they are very like-minded and like-natured. ★★★--just.

First line: Inspector Pitt stared down a the girl and an overwhelming sense of loss soaked through him.

Don't let other people expect you into doing something you don't wish to do. (Aunt Vespasia)

Last line: Charlotte found herself smiling--yes, send for the police--get Pitt! More than anything else--get Pitt!