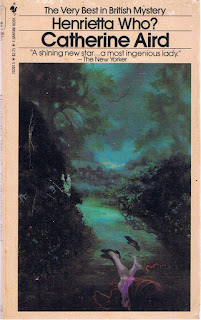 This is the second in the Inspector C. D. Sloan police procedural series and, as with the first--The Religious Body, Sloan finds himself looking to the past to find answers to some very present murders. He and DC Crosby are called to investigate a traffic fatality. What looked at first to be a simple hit-and-run, soon gives evidence of having been a carefully planned murder. But who would want to kill Grace Jenkins, a widow who has always kept herself to herself and had no real friends--let alone enemies. But there are even greater questions ahead. When Grace's daughter Henrietta comes home from university to identify the body, she finds that someone has broken into her mother's desk...but apparently they had a key to the cottage because there's no sign of forced entry.

The next shock in store is when the pathologist discovers that the woman Henrietta has identified as her mother had never borne a child and most likely was never married at all. If Henriett isn't Grace Jenkins's daughter, then who is she? Further investigation by Sloan reveals oddities about the man whose picture has held pride of place in the cottage. A picture of a man whom Grace claimed as her husband--killed in the war and decorated for service. But the medals on the man in the picture and the medals kept in a drawer don't match. Henrietta begins to wonder if anything she she's believed about herself is really true.

The hunt for a murderer by motor vehicle soon turns into a hunt for identity as well--Grace's, Henrietta's, and the man in the photo. If they can just find some proof indicating who any one of these really is, then they'll have something to work with and perhaps be able to find the motive. The man in the photo is eventually traced, but he's killed before Sloan can question him. It isn't until Sloan and Crosby tap into the correct memories from twenty years ago that they find the clue to the modern mysteries.

Sloan is a very low-key detective--no great flights of inspiration, no colorful habits or peculiarities. He just does the day-to-day work of a Detective Inspector (and delegates the more tedious tasks to Crosby--such as searching through the records of past cases and hunting up all the Holly Tree Farms in the area). He has a wry, not quite sarcastic wit that shows itself particularly in interactions with Crosby and his superior, Superintendent Leeyes, but is very humane when dealing with Henrietta, showing great concern for the girl's plight.

The mystery itself is a very interesting one with both victim and murderer as unknown quantities--and even the relations of the victim having their identities questioned. It's rare to not only have a "whodunnit" but a "who had it done to them" as well. It seems for a while that the identity question has taken over the book, but the reader should never lose sight of the fact that once the identities are sorted, the motive for the murder and the identity of the murderer will become clear. Overall, a highly enjoyable mystery. ★★★★

Also read and reviewed by Aidan at Mysteries Ahoy!, TracyK at Bitter Tea & Mystery, and Les at Classic Mysteries.

First lines: Harry Ford was a postman. He was a postman of a vintage that is fast disappearing--that is to say he still did his delivery rounds on his bicycle.

Last line: I've had a man posted outside his house for days now and the old boy hasn't stepped out of his wheelchair once.

Thanks for linking to my review, Bev. This is one of my favorite of Catherine Aird's mysteries. I have only read 6 in this series, but want to read more of them.

You're welcome! I've been trying to remember to look for and link up reviews from other bloggers.

I've been revisiting some of the mystery authors I read long before blogging--especially those I remember really liking. Aird holds up really well.