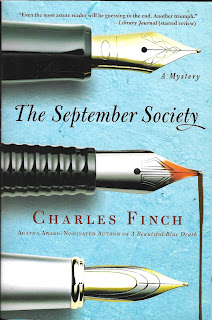 The September Society (2008) by Charles Finch

What is the September Society and what does it have to do with the disappearance of two Oxford undergraduates? That's what Charles Lenox must determine when a frantic mother comes to him one early morning in the fall of 1866. Lady Annabelle Payson wants Lenox to find out what has happened to her son George. When Lady Annabelle visited her son at Oxford, he promised to meet her at a tearoom. He never showed up. She then went to his rooms in college to see if he had been delayed and found his cat apparently stabbed to death. Lenox agrees to take up the case and upon investigation finds an assortment of clues in the boy's room: a collection of red items deliberately left beside the cat (a tomato, a bit frayed string, and a fountain pen with red ink); a line of ash on the windowsill; and a card embossed with The September Society on the front and odd markings on the back. Under the cat is a note with what looks like a code on it.

Further investigation reveals that George Payson is not the only Oxford student who is missing. One of his two closest friends, Bill Dabney, has also disappeared...and the third member of the trio, Tom Stamp, has no idea where his friends have gone. It isn't long before a body is found--and identified as Payson. But where is Bill Dabney? Did he commit the murder? Or did he witness it and is now on the run? With few clues to lead him forward in the case, Lenox concentrates on the September Society--a club dedicated to a certain regiment which served in India. The mystery deepens when he discovers that George's father, who died while in India, served in that same regiment and would have been eligible for the September Society had he lived.

Lenox believes that the key to current events lies in the past. He uncovers the truth of two other deaths connected with the Society and it becomes clear that secrets long buried are reaching out to affect the present. But will he be able to discover the truth in time to prevent another death--perhaps his own?

My previous (very short) review mentions that I thought this a better book than the debut novel, in part because it has an academic element and I do love an academic mystery. That still holds true. Finch gives us Oxford as the backdrop for a great deal of the story and the descriptions of the university and the surrounding area are fantastic. I also enjoyed having the novel focus on the three undergraduates and the mystery of what George Payson (primarily) has to do with the September Society. The mystery plot is very good and Finch pulls off a very nice twist in the final chapters--one that I had forgotten about and (once again) did not see coming. I also enjoyed Lenox picking up a protégé and hope that we will see more of John Dallington in the future.

I do have to concur with other reviewers on Goodreads that Lenox in love is...well...wishy-washy and muddled. Rather than start with him waffling over when and how to ask the lady to marry him--and continuing that atmosphere until the very end, I think it would have been better to build his realization of his true feelings over the course of this novel and then provide the proposal in the last chapter. But that is a minor quibble. Overall, this is a very enjoyable mystery with good background, an interesting connection to the past, and a fine, twisty ending. ★★★★

First line (Prologue): The first murders were committed nineteen years before the second, on a dry and unremarkable day along the Sutlej Frontier in Punjab

First line (Chapter 1): The only question left, he felt, was how to handle the matter--how it was to be done.

Last line: So he reminded himself to mention it later and stepped into his carriage, a comprehending smile on his face, off again to work, as above him rivers of autumn pink and purple ran across the heavens.