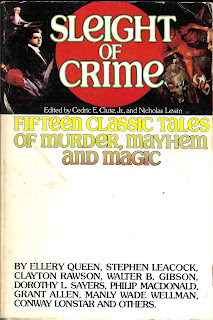 The editors have put together a selection of stories--nearly all from the 1960s or earlier--which feature magic and magicians. I almost wrote "a selection of mystery stories" but that would not be quite true. There are several stories here that could not, by even a stretch of the imagination, be considered mysteries. As always with such collections, there are good stories and not-so-good stories. And some are downright disappointing. Stephen Leacock, I'm looking at you--twice. And Gibson's first story isn't much better, though his second story, "The Florentine Masks," makes up for it. Yarbro's story is good (I've often enjoyed her writing), but it is more a story of revenge than murder or mayhem. And "A Trick or Two" by Novotny is a nice little bit of writing, but, again, not a mystery. My favorites of the actual mysteries are "From Another World" by Rawson; "Death by Black Magic" by Cummings; and "Murder among Magicians" by Wellman. Lord Peter Wimsey is always a favorite and I could reread his stories any number of times (and have). ★★★ for the collection as a whole.

"The Conjurer's Revenge" by Stephen Leacock: What kind of revenge would a magician take on the wise guy in the audience who reveals all the secrets behind the tricks? We're about to find out....

"From Another World" by Clayton Rawson: Andrew Drake is a wealthy man with a recent obsession with ESP. While participating in an experiment, he allows himself to be sealed up in a room and is then found dead with an unconscious girl nearby. If she stabbed him, then who bashed her on the head? And how did they get out of a sealed room?

"The Episode of the Mexican Seer" by Grant Allen: Sir Charles Vandrift isn't an easy man to fool, but Colonel Clay manages to do so repeatedly in An African Millionaire. This time Clay plays the part of a Mexican seer who can make Vandrift's signature appear magically on his forearm...and perhaps somewhere else as well....

"A Trick or Two" by John Novotny: They say that everybody has a trick...or maybe two. But Jesse is definitely not going to be appreciative of Laura's trick when she offers it in exchange for his.

"Lammas Night" by Chelsea Quinn Yarbro: Yarbro gives us a version Count Alessandro Cagliostro, real-life 18th Century alchemist and conman. He has promised to summon a demon for the other nobles...but they may get more than they bargained for.

"The Man of Mysteries" by Walter B. Gibson: Professor Anthony appears in an office and teaches the occupant a thing or two about mysteries.

"Death by Black Magic" by Joseph Cummings: Senator Brooks Banner is also a magician and a detective and he uses his powers to solve the "impossible" murder of The Great Xanthe. And solves a fifteen-year-old mystery in the process.

"The Adventure of the Hanging Acrobat" by Ellery Queen: An acrobatic vaudeville performer is found hanging in her dressing room and it isn't suicide. Ellery has to answer the question of why she was hanged (there were four other weapons already in the room...somebody had to go to another room to get the rope). There must be a reason why she had to be hanged.

"Murder among Magicians" by Manly Wade Wellman: They say it takes a thief to catch a thief...but does it take a magician to murder a magician? In this case...quite probably.

"The Green & Gold String" by Philip MacDonald: Dr. Alacazar, a mind-reading, fortune-telling rogue unravels the solution of one murder while trying to angle for a $5,000 reward and winds up preventing a second one.

"Professor Swankton's Ruse" by George Johnson: Not really a mystery at all. Just a short, mildly amusing story about an artist who sees through part of a mind-reader's act.

"The Florentine Masks" by Walter B. Gibson: The Great Gerard beats an evil art thief at his own game...with a couple of Florentine masks.

"The Weapon from Nowhere" by Conway Lonstar: A psychic predicts a murder in her house which happens exactly as she saw--despite the presence of the police and the press.

"The Incredible Elopement of Lord Peter Wimsey" by Dorothy L. Sayers: finds my favorite aristocratic sleuth in one of his rare adventures outside England. Lord Peter becomes interested in a rather grotesque revenge--plotted and carried out in the Basque region of northern Spain. It is up to Lord Peter to rescue a damsel in distress from the evil machinations of her jealous husband.

"A Model Dialogue" by Stephen Leacock: How to frustrate a magician in one easy lesson.

First line (first story): "Now ladies and gentlemen," said the conjurer, "having shown you that the cloth is absolutely empty, I will proceed to take from it a bowl of goldfish."

Last line (last story): "It must be such an awfully clever little trick. Good night!"