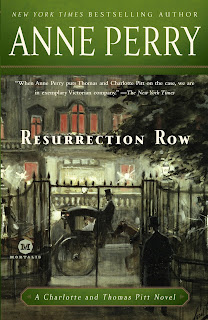 The case of the reappearing corpses: Lord Augustus Fitzroy-Hammond of Gadstone Park was properly buried after dying from a heart attack several weeks ago. So what is his body doing sitting atop a hansom cab like some sort of other-wordly cabbie? That's what Inspector Thomas Pitt would like to know. Graverobbing is a crime and he must discreetly try to find out what motive there could be for disinterring a lord and displaying his body on a cab. But Fitzroy-Hammond hasn't made his final appearance. Not long after a second burial, the nobleman makes a second escape from his grave--this time to take a seat in the family pew on a Sunday morning.

From there bodies keep appearing where they didn't ought to be. The gravediggers discover another corpse resting in Fitzroy-Hammond's coffin when it comes time for them to attempt to bury his lordship a third time. But no one know who this fellow is right away. It's thought he might be the body missing from a Mr. Porteus's grave, but the widow Porteus declares that it's not her husband. A third corpse is then discovered and that one is Mr. Porteus. And then another man, a well-known procurer Horry Snipe who was run over by cart, is found wearing a stovepipe hat and sitting on a gravestone in the Resurrection Row cemetery. Eventually the second, unclaimed body is identified as a Mr. Wilson--whose grave doesn't appear to have been dug up. But when Pitt arranges for the grave to be opened up a final body is discovered.

Up till now all the bodies have died from natural causes or by accident. But not this one--this one has been strangled and is quickly identified as Godolphin Jones, a portrait artist also living in Gadstone Park who was thought to have gone on a trip to France. Pitt's attention is redirected back to the gentry who live near Fitzroy-Hammond and Jones. Who could have wanted the artist dead? He overcharged for his portraits, but surely that isn't cause for murder...or is it? And why play musical graves with four other bodies? Thomas soon notices clues in Jones's paintings which tie in with an odd little notebook and the trail leads him back to Resurrection Row and a secret worth killing for.

This fourth book in the Charlotte and Thomas Pitt series was the best yet. Perhaps I have an off-beat sense of humor, but I found the idea of corpses popping up in unlikely places quite entertaining. Other bonuses are the reappearance of Aunt Vespasia (whom we met in the last book) and Pitt's emergence as a much more energetic and involved detective. We actually get to see him following up clues and looking through evidence rather than just questioning people and disappearing for a great deal of the book. The plot was a bit twisty--with various threads, some of which are nicely done red herrings. Overall, a satisfying read. ★★★★

First line: The fog swirled thick and sour down the street, obscuring distances and blurring the gas lamps above.

Last line: "In the name of the Queen, I arrest you for the wilful murder of one Godolphin Jones, artist, of Resurrection Row."

Deaths = 5 (three natural; one run over by a cart; one strangled)