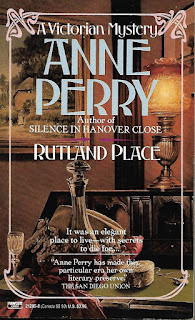 Caroline Ellison, mother of Charlotte Pitt [our amateur sleuth who is the wife of a policeman], sends a frantic note to her daughter asking for help with a disturbing "event." When Charlotte arrives at her parents' house, she finds her mother nervous and upset over the loss of a small locket. After much difficulty in getting straight answers from Caroline, Charlotte finally learns that the locket contains a somewhat compromising photograph...of a man who is not Edward Ellison. Caroline has also felt like she's being watched, perhaps by someone biding their time before trying a spot of blackmail. She asks her daughter to help her get to the bottom of the matter.

In the course of paying social calls, Charlotte soon learns that others have had items come up missing as well. Is it just petty thievery or is there more going on? When Mina Spencer-Brown dies of a belladonna overdose, it looks like there is something much nastier going on in Rutland Place--especially when it is proved that she couldn't have taken such a large dose by accident, nor that she had access to the poison. Mina was a woman who like to hint that she knew more than others about certain "mysteries" and "scandals" among her neighbors. Did she hint once too often and to the wrong person? Would the Charringtons kill to keep the secret of their daughter Ottillie's death from being known? Would Theodora von Schenck kill to prevent anyone from finding out where her extra funds come from? Are there other, even more desperate secrets worth killing for? And what do the thefts and Caroline's locket in particular have to do with it all.

There is a bit of a dark streak to this one--the reasons behind the deaths are somewhat disturbing, especially the second one. But there are some very fun moments to this one as well--Charlotte's excursion to the music hall is particularly good. I did enjoy watching Emily maneuver her father into paying more attention to his wife--which is just what Caroline needed to get her mind off a silly infatuation.  It was a shame that we didn't see more of Pitt and there is not the urgency in the investigation that we found in the previous book. But overall, a solid mystery and good afternoon's read. ★★★

First line: Charlotte Pitt took the letter and looked at the errand boy in some surprise.

Last line: It wasn't until Inigo Charrington stood in the doorway, his eyes full of sympathy and affection, that at last Charlotte let go of Eloise.