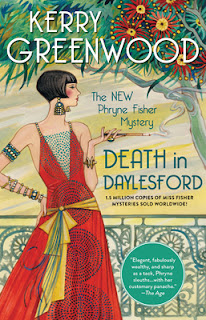 Death in Daylesford (2020) by Kerry Greenwood

In her 21st mysterious adventure, Phryne Fisher is destined to unravel not one, but two separate mysteries in the country while her adopted daughters help Sergeant Hugh Collins with a mystery back in St. Kilda. Phryne receives an invitation from Captain Spencer asking her to check out his health spa for veterans of World War I dealing with shell shock. He's hopeful that once she sees the good work he's doing that she will be willing to make a donation to the cause.

Phryne and Dot have barely established themselves at Daylesford when it becomes apparent that all is not well. There are "accidental" deaths and they hear of women disappearing. The center of the mysterious deaths appears to be Annie, a beautiful young woman who works at the Temperance Hotel. She is the hope and dream of every young man in the area and it seems more than a coincidence that her most devoted beaus keep dying. The first fell from a train window before Phryne arrived in the country town. The next was killed when another suitor, famous for his ability to toss cabers (a huge, roughly trimmed tree trunk), is startled into a deadly slip. A third dies of poisoning at a local dance.

The second mystery surrounding Daylesford involves the disappearance of several women. No trace is found of them--either living or dead--and their families and the police are baffled. One woman apparently took off in her night dress. Phryne spots clues that point to the local lending library, knitting patterns, and a particular kind of scarf.

Meanwhile, Tinker (a more recent addition to the Fisher household) discovers a dead young woman floating near the docks. The body is that of a schoolmate of Ruth and Jane (Phryne's adopted daughters). The three young people get involved in a mystery of their own--assisting Sergeant Collins to discover who put the girl in the family way and how she came to her death.

It's been a while since I visited with Phryne Fisher. This newest mystery seems to be a bit more sedate--the pace is more steady and there's less adventure than in some of the earlier books. But the plot is an interesting one and it was nice to see the young people investigate on their own. Still very enjoyable and a good mystery. ★★★★

First line: It was a lazy, late summer's morning in St. Kilda.

Perhaps you only came to a full appreciation of the virtues of your superiors when they were replaced by machine-made numbskulls. (p. 91)

Like all women, Phryne was fully prepared to be bored senseless by Men Explaining Things if there happened to be a good reason for it. (p. 139)

Last lines: "And confusion to our enemies!"  "Hear, hear!"

Deaths = 5 (one drowned; one hit with large pole; one fell from a train; two poisoned)