Funerals Are Fatal (After the Funeral) 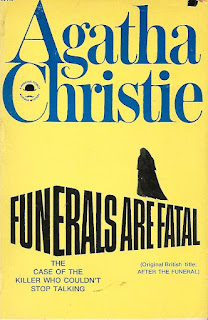 Funerals Are Fatal (After the Funeral) [1953] by Agatha Christie

Cora Lansquenet has always had a way of blurting out whatever came to mind--inconvenient truths, as Mr. Entwhistle, the family lawyer tends to think of them. One never knew for sure if  Cora was as innocent as she seemed or if she dropped these little verbal bombs to see what effect might be produced. So it isn't odd that she does a bit of blurting when the Abernathie relations return to the family home after the funeral of the Richard Abernathie--Cora's brother and family patriarch, so to speak. But "he was murdered, wasn't he?" seems a bit extreme even for Cora. No one appears to take her seriously and they all try to pretend it was never said. But a few of them, including Mr. Entwhistle, have to wonder whether Cora knows something.

Then, when Cora is subsequently murdered by someone wielding an axe (and who tried, very inefficiently, to make it look like a random robbery gone bad), Mr. Entwhistle begins to think there was something in that statement after all. He calls upon his old friend, Hercule Poirot, and asks him to investigate. Not long after, Cora's companion, Miss Gilchrist, is nearly done in by a piece of poisoned wedding cake. Poirot's investigation reveals that all of Richard Abernathie's relatives had a motive--primarily monetary and they all benefit under Richard's will. From his brother Timothy and wife whose home is badly need of funds for upkeep to his nephew George who has been speculating with other people's money (and losing) to his niece Susan who wants to the money to start a new business to his niece Rosamund and husband who want the the money to put on a play (with hubby in the starring role).

Richard, if truly murdered, must have been poisoned and the poison could have been planted at any time. But who had an opportunity to kill Cora? As it happens...just about any of them. No one has a really good alibi. It isn't until Poirot understands what is behind the running theme of nuns and paint--and Helen Abernathie (wife of Richard's deceased brother, Leo) remembers what bothered her on the occasion of Cora's exclamation after the funeral that our detective is able to find the villain of the piece.

I thought I knew who did it. Then I got distracted by a few red herrings and changed my mind. I should have stuck with my first thought...Dame Agatha managed to throw the dust in my eyes once again for another enjoyable Poirot mystery. In this one, he collects few clues and discerns all through interactions with people--just letting them talk and unknowingly reveal their true natures to him--and, of course, employing his little grey cells. ★★★★

Funerals are absolutely fatal for a man of your age. (Mr. Entwhistle's sister; p. 21)

The very simple-minded have often the genius to commit an uncomplicated crime and then leave it alone. (Hercule Poirot; p. 117)

If the murderer is wise he will let well alone, but murderers, Inspector, are seldom wise. (Poirot; p.124)

Things aren't over when you've done them. It's really a sort of beginning and then one's got to arrange what to do next and what's important and what's not. (Rosamund Shane; p, 154)

Everyone had accepted U.N.A.R.C.O. as a matter of course--had even pretended to know all about it! How adverse human beings were ever to admit ignorance! (p. 165)

It is a profound belief of mine that if you can induce a person to talk to you for long enough, on any subject whatever, sooner or later they will give themselves away.... (Poirot; p. 221)

Last line: They were silent--and Poirot thought of murderers he had known...