Mystery on the Isle of Skye 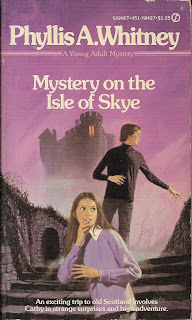 Twelve-year-old Cathy MacLeod is going on an adventure of a lifetime...an adventure that may change her life forever. Ever since her parents had died when she was small, Cathy has lived with her grandmother. But now her grandmother is ill and Cathy will need to live with a distant cousin of Grandmother's named "Aunt Bertha." Aunt Bertha is a formidable woman and Cathy isn't sure how much she will enjoy living with her. But before she makes that move, her mother's brother Jerry invites Cathy to join their family on a trip to the Isle of Skye in Scotland. Uncle Jerry is a climber and has always wanted to climb the hills and mountains of Scotland. Aunt Lila is a MacDonald and has always wanted to visit the land of her ancestors. And Grandmother thought it would be a good opportunity for Cathy to see the home of the MacLeods.

Before she leaves, Cathy's grandmother puts together a red case with wrapped surprise packages. It includes a letter that tells Cathy to open the packages according to the instructions included on each. Some of them require Cathy to perform certain tasks first and others instruct her to enlist the help of her cousins. Speaking of cousins--Punch, the younger of the two boys, takes to Cathy right away. But Don is at that stage (as her Aunt Lila tells her) "when he thinks all girls are poison." So Cathy isn't too sure that Don will want to help her with her tasks. But a series of adventures, including a scary hike on a mist-covered crag and a visit to a legendary castle, will bring Cathy the biggest surprise of all...when she least expects. Along the way she makes new friends and learns to be more sure of herself and what she wants.

I think this might have been more properly called "Magic" on the Island of Skye rather than mystery. There isn't much mystery (in the traditional genre sense) in this story. But there's a fair bit of magic--from the magic of the Island of Skye itself--the beautiful countryside, the brooding mountains, and the fog that cloak with mystical swiftness--to the magic of the little people, whom Cathy's grandmother tells her may be able to help her when she least expects it to the magic of meeting new people and making new friends. It is also a lovely coming of age story and also a good story about finding family and a place where you belong. And a place that will always belong to you--even if you can't stay there forever. ★★★★

First line: The porter, carrying Cathy's suitcase, went ahead through the doors of Idlewild International Airport.

Last lines: Always these things would be a part of her, always they would pull her back like those words Ranald had written in her album: "...the blood is strong, the heart is Highland..." Perhaps that, after all, was the strongest magic in the Isle of Skye.