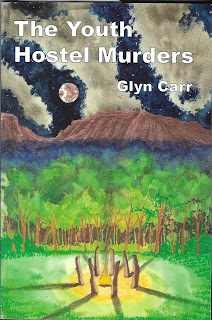 He supported Grimmett's proposition partly because of his old acquaintance's obvious eagerness to investigate and partly because he felt the insidious excitement of detective work in prospect. The thrill of the successful manhunt, once experienced, is not soon forgotten. (p. 42)
The Youth Hostel Murders (1952) by Glyn Carr

Abercrombie Lewker, Shakespearean actor and manager, and his wife Georgina are off to the Cumberland fells for a holiday. They hope to enjoy the scenery and maybe make a climb or two (Abercrombie). They don't expect to be drawn into a series of murders almost as soon as they get into the small village of Birkerdale. One climber falling to their death a few weeks earlier with only a killing blow to the back of the head and no other injuries is unlikely...but just possible. A second climber falling in the same place with an identical injury is nigh on impossible. But Lewker is still ready to let a ruling of death by misadventure stand until his old comrade-in-arms Detective-Inspector Grimmett arrives and has suspicions about the deaths.

To help the investigation along, Lewker takes up residence at the Cauldmoor Youth Hostel--where both the victims had stayed. He meets an eclectic group of young people who may or may not have information about the deaths. Most of them seem to have alibis for either one of murders...or both. But each of them, including the interim warden of the hostel, seem to have a few secrets to hide. One is pretending to be a Welshman. Another has a strange interest in witchcraft. A third has a hasty, sometimes violent temper and had previously attacked another man. There are others to keep an eye on as well--Ben Truby, a local shepherd who insists the "Old Ones" are behind the deaths, and George Roughten, the owner of the local pub who studiously avoids talking about some of the hikers. But it isn't until a third death, under slightly different circumstances, that Lewker gets the final pieces of the puzzle that will allow him and Grimmett to capturer the murderer.

This was a fun and easy read. The necessary climbing information is given to the reader without burdening the narrative with boring facts. And we get a very good sense of the climbing terrain  and beautiful scenery around the hostel. Carr also does a very good job handling all of the characters involved from Lewker & his wife to the the eight residents of the hostel to the members of the Birkerdale community. There are a lot of people to keep track of, but it is very easy to do so. I think this is the strongest part of Carr's work. Red herrings and mystification of the reader--not nearly as much. I figured out the main who and why long before Lewker ever gets round to telling us. In fact, it seems to me that Carr rather hits us over the head with two of the major pointers--but maybe that was just me. A nice, comfortable vintage mystery. ★★★ and a half.