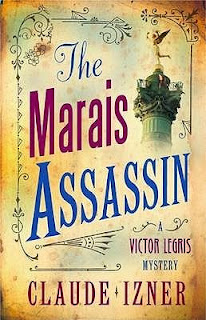 The fourth book in the Victor Legris series. This time a murderer is on the track of those who have handled a decorative goblet of little value. It's bowl is in the shape of a monkey's head, it is incrusted with worthless jewels and has a cat's head attached to it. But a trail of death follows it wherever it goes. The first to die is the widow of the man who brought it back to England from Java. She, upon her husband's directions in his will, had sent it to Kenji, Victor Legris's mentor and partner at the bookshop. While Kenji is away from Paris, his apartments are burgled and the goblet is one of three things taken.* A mysterious man also visits the bookshop in Kenji's absence and Victor once again begins investigating. He, Joseph (the shop assistant), and Kenji follow the goblet's trail across Paris--from an apparently crazy old man to various curiosity dealers and barrow owners throughout the city. But the killer--who is obsessed with the goblet--manages to stay one step ahead of them. Will they be able to track the goblet and put a stop to the killing spree?

I wish I could say I recommend this series, but I honestly can't. The mystery ought to be gripping--some of the scenes are very apt and with the right treatment could have made the book as whole very appealing if the same level had been maintained. But it wasn't--and hasn't been in any of the books so far. I mentioned in my review of the last book that I thought I might enjoy the series more if Joseph were the main protagonist instead of Victor. That's still true. Victor behaves as if he's under some sort of obligation to dabble in amateur detection. There's no sense that he's really interested or that he has much aptitude for investigation. Joseph, on the other hand, is very interested in mysteries and investigates with enthusiasm (except when Victor fobs the interviews with the crazy old man on him...but I hardly blame him for being less than excited with that assignment). If you like a lot of background on the characters and a lot of their personal drama that has nothing to do with the mystery at all, then this will be right up your alley. I will rate this one a bit higher--at least at the end of this one Victor seems to be getting his jealousy under control.

Why, you may ask, do I continue to read these books then? Well...I took it into my head to buy up volumes 1-6 from our Friends of the Library Bookstore and then Rick Mills has his Six Shooter Reading Challenge which requires reading six books from the same author. So...I'm determined to knock out the rest of these for one of the requirements. Four down and only two more to go. ★★ and 1/2

*It's never explained why the thief--who's only object was the goblet--bothered to steal two books as well. In fact after the details of what was stolen are given to the police, we never hear about the books again.

First line: the clock of the Eglise Trinite had just struck eight o'clock in the morning, when without warning, an ear-splitting explosion ripped through the district.

Last line: Without being aware of it, he began to sing softly. "Sometimes when my heart is heavy ~I go out and take a stroll ~In all the little streets and alleys..."

I really disliked the first one in this series and never went back. I read it when it first came out ion my pre-blog days and my review is still on Amazon with the other two star reviews:

"If you love clichéd renderings of "turn of the century" types, then dig right in. If you like a jumbled mess of a plot that jumps all over the place never making any sense at all, you'll love this. I found the whole thing extremely tiresome.

A love struck --make that obsessed-- bookseller chasing after a newspaper illustrator makes up most of the plot. Based almost entirely on coincidence (but mostly because his name is in a visitor's book at the top floor of the Eiffel Tower) the bookseller suspects his boss as the murderer. Then he shifts his suspicion (based on the same absurd "reasoning") to the woman with whom he is obsessed. His "detective" work is the stuff of juvenile adventures like the Hardy Boys books (pretending to be a reporter, asking the neighbors nosy questions, etc.) It's all nonsense."

There's more but I'll spare you. ;^) You are definitely more patient with this writers (aren't there two of them who make up "Claude"? Two people should make for a better book, don't you think?) than I am.

John--I don't blame you for chucking the series after the first one. If I hadn't accumulated the first six and foolishly decided to put them down for that challenge, I wouldn't be going on. [Challenges will be the death of me yet....]

And, yes, two sisters write these things and one would hope that two heads would be better than one. But not always--apparently.