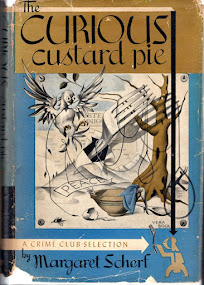 This is the second mystery based at a camp to appear in the 4-in-1 Unicorn Mystery Book Club edition that I've been reading. Scherf's book features Dr. Yates's World Amiability Camp situated at Weed Lake, Montana. Three weeks of nothing but pep talks on world peace and harmony and bad food. The food is supposedly concocted by a dietitian, Mrs. Everdell, to produce bodily harmony to go along with the rest of it. But when Dr. Martin Buell, Presbyterian minister, is deputized to represent the church and deliver "Talks on God," he discovers that Mrs. Everdell's idea of bodily harmony consists of kelp, soybean mush, lemon juice with eggshell, and other items he considers inedible.

So, he, being a fair cook himself, decides to liven up the menu with some homemade custard pies and convinces Dr. Yates to make a real feast of it with steaks on the grill. But somebody slips some arsenic into the flour and several people get very sick...two sick enough to die. Dr. Buell has had previous experiences with murder and he starts to investigate. Mrs. Passfield, one of the less fortunate victims, had mentioned to Dr. Buell that she was visiting the camp to be sure that she still wanted to leave $250,000 to the World Amiability Foundation. If she found things to her liking, then all well and good. If not, then she planned to make a few changes to her will. An arsenic-laced meal prevented her from having a chance.

Mr. Tattersall, the foundation accountant and the other unfortunate victim, had also felt like confiding in Dr. Buell. Tattersall was a nervous man by nature and seemed to be even more so. He was worried that Mrs. Passfield and a Mrs. Brierly were both in the camp at the same time. Both ladies were involved with the late Mr. Passfield and both were interested in the fortunes of the camp. Passfield had left his wife the large fortune with the quarter of a million earmarked for the camp--if after ten years, she felt it had proved itself a worthwhile venture. Tattersall also mentioned that he had other worries, but was interrupted before he could share them. His last supper prevented him from having another chance.

With both victims having special connections to the camp and foundation, Dr. Buell has to wonder whether this mean that Dr. Yates sprinkled the rat poison around to make sure the promised legacy made its way to the coffers...and maybe Tattersall knew that there was an unexplained drainage on the foundation's funds. But Yates isn't the only one who could have cooked the books. There's Bob Lundquist who handled the foundation's scholarship program. And Mrs. Everdell handles the expenses for the kitchen (just how much does kelp cost, anyway?). Of course, there are also other motives beyond money--including jealousy (Dr. Yates seemed to attract the attentions of all the ladies in the camp which has led to some spirited infighting amongst our harmonious crowd) and fanaticism. Dr. Buell and his friend Sheriff Hunnicut have their hands full and it will take two more murderous attempts--a second on Mrs. Brierly and a final attempt on Buell himself--before they get their man/woman.

I've read three of Margaret Scherf's mysteries previously and all three of them featured Emily and Henry Bryce. I hadn't realized that she had another series character until I started reading Custard Pie. Unfortunately, I don't find Martin Buell to be as funny and personable as the Bryces and his interactions with Hunnicut fall a bit flat for me. His best showing was when, midway, he picks up a sidekick--Sir Wilfred Soper, a visiting Englishman. When the bishop saddles Buell with a guest, he's none too pleased. He's sure the chap from across the pond is going to be stuffy and class-conscious and put a serious crimp in his crime-solving style, but Soper is like a schoolboy on holiday and tremendously eager to join in on the sleuthing. The narrative picks up a great deal once Soper arrives. One wishes he had arrived at the beginning of the story.

The mystery itself is okay and a fine read if you don't mind it not having tons of clues for the reader to spot. It's a closed circle murder, though not an impossible crime. Nearly anyone in the closed circle had an opportunity to add a dash of arsenic and a number of them had motives. Getting down the particular motive may be a bit tricky.  ★★★ for a decent read--though I would suggest starting with one of the books featuring Emily & Henry Bryce if you want to try Scherf for the first time.

First line: Martin Buell had his weight evenly distributed along the length of a striped canvas chair.

The head was withdrawn with a sound which took the place of swearing in Mrs. Beekman's aseptic vocabulary. (p. 10)

Tattersall smiled a little and tried to let go, but he couldn't. It was doubtless a habit, this tight grip on the universe as if it would slip away and become very confused but for his firm hand on the reins. (p. 17)

[Tattersall] had certainly come with a purpose, but it was evident that purpose would not be disclosed hastily. Accustomed to the diverse means by which human beings communicated their mental aches to someone they felt ought to be sympathetic, he waited. He was not interested, but he waited. (p. 24)

Perhaps the bishop, knowing that no clergyman is perfect, reasoned that an interest in crime was less damaging to the dignity of the cloth than an interest, say, in women. (p. 113) 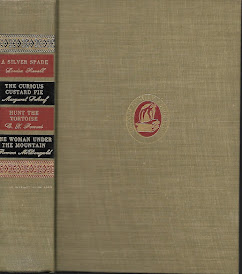 As I see it, there are two kinds of murders, in general. Those that are finished when the law comes on the scene, and those that didn't work according to plan and are therefor still going off, rather like an unexploded roman candle. In the first type, the murderer rests, gambling that he has left no good clues. In the second type, he must continue to act. It's like fencing or a game of chess. He moves, then you move. then he moves again. Much more dangerous for both sides. (Sir Wilfred Soper; p. 126)

Last line: "She's much too young for whiskey," Mrs. Beekman said, taking the glass, and with a righteous frown she tossed off the contents.

Oh, Mrs. Passfield didn’t learn that if you are going to cut someone out of your will, you never tell them in advance! Regarding kelp, a.k.a. seaweed: You can pick it up off the public areas of Maine coast for free if you are going to do-it-yourself. Or you can buy it processed, dried, and packaged for about $25/lb which is a LOT of kelp. Those Unicorn editions look pretty nice!

Rick: Yes, it's always best to smile placidly at the prospective heir and pretend all is well and then secretly call for your lawyer....