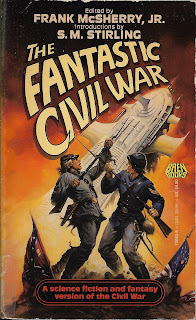 A collection of nine short stories and one novella featuring answers to the question "What If" as it is applied to the Civil War. What if time travelers from the future brought advanced warfare to the American conflict? What if an entire regiment of modern (1940s modern, that is) U.S. soldiers suddenly found themselves at a key battle of the Civil War? What if a mountain man from Virginia called upon arcane powers to help the Confederate army win the war? What would the country look like if the war ended a bit sooner and the Union had still won? Talented historians and science fiction writers examine these questions and more.

As with all collections, there are strong stories mixed with those that are less so. My favorites inclue "The Chronicle of the 656th" which features (as mentioned above) the 656th Regimental Combat Team on training maneuvers in Tennessee in preparation for deployment in World War II. Through inexplicable means they are transported back to a key battle towards the end of the Civil War. I also enjoyed "The Valley Was Still," a story that shows what might happen if arcane powers are called upon to aid the cause of the Confederacy AND a story that examines what Lee would have done with assistance from the future in "Quarks at Appomattox." A close fourth and fifth are "The Avenging Angel"--which has a slightly different twist on the premise of outside assistance for the Confederate army--and "Time's Arrow," a story which examines whether time travelers would even be allowed by the time continuum and, if so, what the consequences might be. [Be careful what you wish for...]

Ironically, most of my favorite stories are by authors whose names are less well-known to me. All but Manley Wade Wellman ("The Valley Was Still") were new-to-me authors and their stories held the most interesting and engaging alternate histories. I was very pleased to read so many good stories from authors I'd not encountered before.  ★★★

First line (of first short story, "For the Love of Barbara Allen"): My grandfather sighed and thumped wearily on his guitar, then laid it aside, the song unfinished.

Last lines (of last short story, "Time's Arrow"): Except for the TDI [TransDimensional Interface]: A stone-tipped feathered arrow jutted from its polished black metal. It had penetrated right between the mode lamps.