The Bitter Path of Death 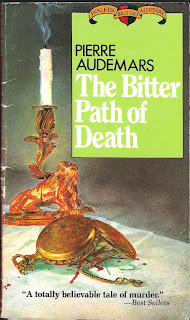 The Bitter Path of Death (1982) by Pierre Audemars

This is the 25th book in the Monsieur Pinaud mystery series, but it features an investigation from early in the Sûreté officer's career when, as he says, he "was young and ignorant." He was certainly a young, reckless driver (witness his excessive speed and three accidents--helped by someone sabotaging his cars, but still). But, although he claims he was young and ignorant, he had already gained a reputation for investigation and the ability to handle cases that seemed insoluble. Here his Chief asks him to investigate the stabbing death of a wealthy, celebrated jeweler named Laroche. He was found dead in his first floor office and had been stabbed in the back of the neck with a short thin knife. Nothing has been stolen and nothing in the office has been disturbed. The weapon is gone; there are no clues and no real motive to be found. It sounds like just the case for Pinaud.

He soon finds that a master watchmaker who often did work for Laroche did have an argument with him the night before the jeweler's death. It seems that Laroche had seduced his daughter and now there is a baby on the way. Monsieur Capet had demanded that Laroche do right by the girl, but Edmund Laroche had only laughed in his face. Capet had promised to return the next night, the night of the murder, to make sure that Laroche acknowledge his duty. Did he return, get turned down again, and then stab the man in anger? But would Laroche have turned his back on an angry father? What about the girl's brother? Had he gone instead of Capet and had he wielded the deadly knife? Or maybe there's more to Laroche's secretary than meets the eye? She had access to everything at the office. And then there's the odd fact that Laroche's own mother seems to think Laroche deserved what he got. Would his own mother have killed him? Pinaud discovers the answer, but still regards the case as one of his failures.

This is a decent mystery, but it feels rather unpolished--perhaps in an effort to give readers a feel of what Pinaud was like when he was "young and ignorant." But after twenty-four other books I expected it to be stronger. It also has an odd feel to it--if Audemars were French and this had been translated, then we could blame it on the translation. As it is, it appears that Audemars has gone out of his way to make it appear to be a translated work with certain infelicities. The plot was workmanlike and believable--but the culprit was certainly no surprise to me. More red herrings would have been welcome and perhaps a few more credible suspects would have helped as well. As an aside: I do have to say that if I were Pinaud's Chief, I would be very reluctant to trust the man with a second car...let alone a third one. Knowing that he loves to drive fast and seems to have a bottomless well to pour drink into...well that doesn't make for a great driver. I hesitate to give this the same amount of stars as the previous review (another mystery set in France), because this one is superior. But I can't see giving The Bitter Path to Death any more than ★★★. [note to self--go back and adjust previous rating]

First line: In the days when all the years of devoted toil and labour given so generously by his chronicler had finally brought M. Pinaud to the peak of his eminence, they were in the habit of meeting frequently for periods of intelligent conversation.

Whatever you say, that case had interest and human appeal. What else do people want when they read? And why do they read?...To escape from the monotony of their daily lives--to be interested, excited, and entertained--to lose themselves for a few blessed hours in a world of make-believe. (M. Pinaud's chronicler; p. 8)

All literature is an escape, particularly crime fiction. It is so much easier in this life to read about something rather than make the the effort to do it. And most people--in spite of what one reads in the newspapers today--are basically good and honest. The majority like to believe that justice eventually triumphs over evil...that the criminal is finally caught and the murderer punished. (M. Pinaud's chronicler; p. 9)

You are quite right. The impossible always takes a little longer--so the sooner I get on with it the better. (M. Pinaud; p. 26)

Last line: He closed his eyes and shivered at the pity, the horror and the tragic waste of it all.