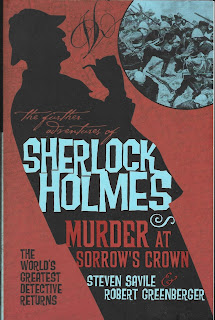 It's summer in 1881 just at the end of the Boer War and early in the association between Holmes and Watson. Funds are low and Watson sets up a parade of potential clients for Holmes in an effort to provide a case that will help fill the coffers*, but it's an unplanned visitor who brings the great detective a puzzle worthy of his skills. Mrs. Hermione Wynter is frantic. Her son Norbert, a lieutenant in the Royal Navy did not return with his ship, the Dido, when it was recalled from South Africa. When she tried to get answers from the Admiralty, she was first given the run-around and then was told that he was missing, presumed dead. And then, finally, told that this was just a polite cover up for the fact that he was a deserter. She doesn't know what happened to her son. But one thing she knows--he's no deserter. And she wants Sherlock Holmes to find out what really happened and why the officials don't want to tell her about it.

On the face of it, it doesn't seem to Watson that this will be of any more interest to Holmes than any of the cases they heard earlier in the day. But something about the way the naval officials have evaded Mrs. Wynter's pleas for information attracts his attention. And when they retrace the frantic mother's steps, they run into the same stonewalling, though Holmes is adept enough at questioning to glean a bit more information. Soon they are engaging trained assassins from India and following a trail that stretches from South Africa to Newcastle and from a lost battle of the Boer War to the halls of Parliament. The game is afoot and it involves much more than just the disappearance of a single naval officer.

Overall, this is an excellent and enjoyable Holmes pastiche. For the most, it captures the flavor of Doyle's works and provides an interesting mystery for Holmes to pursue, though some of the writing seems a bit too modern and it does jar a bit for Watson to call Holmes "Sherlock." It is nice to see a bit more of the early years when Holmes and Watson are just getting used to one another and I appreciated the authors bringing the Irregulars into the story. It was a shame that Doyle did not use them more than he did and it was great fun to see Holmes interacting with Wiggins. The other very nice point was their portrayal of Watson. It has always seemed to me that Watson gets short shrift--a medical man should be more astute than he is often portrayed. Savile & Greenberger manage to make Watson an intelligent assistant to Holmes while still keeping him in the "Watson" role, highlighting that Holmes is the more brilliant of the two. There are medical connections to the story and Watson is allowed his moments to shine as researcher and also making observations that Holmes couldn't (because of a lack of certain medical knowledge). Holmes still puts all the pieces together, but Watson is able to provide some of the pertinent pieces.

The most substantial (though not overwhelming) quibble I have is with the "connection" to Disraeli (to explain would be a spoiler). I don't quite agree that the case has been made in that quarter. I see how that supposed connection advances certain portions of the plot and narrative--but I just don't see that the connection has been proved. It's more a case that Holmes says it's there and then receives confirmation (of a sort) in the denouement and therefore it is so. Otherwise, a highly enjoyable read. ★★★★

First line: As celebrated as Sherlock Holmes was around the cusp of the twentieth century, a number of his investigations were deemed sensitive to national security.

Last line: Whilst I could not tell Mrs. Wynter the particulars of her son's death, I could set her mind at ease and offer her testimonies of his comrades, and in some small way, perhaps, finally bring him home to her.

Deaths: 5 (two poisoned; one stabbed; one suffocated; one shot)

I’d like to read this. Thank you for sharing.
www.rsrue.blogspot.com