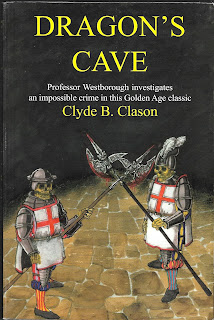 Jonas Wright is a print shop owner and collector of antique weapons--most particularly those with blades of one sort or another. He's a fair but very puritanical man and once you cross his standards, it's doubtful whether you'll ever be in his good graces again. Several of his family and employees have run afoul of his temper--his son Wellington drinks and carouses too much; his fiery-haired daughter Madeleine has a fiery temperament to match and seems to take up with the most inappropriate men; his partner Julian Carr is a married man and paying too much attention to his daughter; one of his printers Tony Corveau has been recently fired for unknown reasons; and his second son Martin likes to parade his knowledge about a little too freely. Then there's Hilda Hammer, a servant in the house. Hilda's brother is an ex-con and she's living there under a false name. She claims Wright didn't know...but is that the truth?

These facts all become relevant when Wright is found dead behind the locked door of his weapons room. It appears that he has been killed with his very own Gothic halberd. At first glance, it looks like a murder in the heat of the moment--with the killer snatching up a weapon (he had plenty of choice) and using the ax-like blade to slash Wright's throat. But as Lieutenant Johnny Mack and his friend Professor Westborough examine the body and the scene of the crime, they realize that certain clues just don't add up. The weapon was displayed on the opposite side of the room from where the murderer apparently stood, for one. There's a separate, smaller wound on the back of the victim's neck. And the bloodstains don't tell the right story. Not to mention how did the murderer get out of the locked room?

Two more deaths follow and Mack and Westborough must figure out how these murders connect to that of Jonas Wright. And few questions must be answered before they will be able to capture the culprit.. Here's a sample: Why was Wright's desk searched after the murder? Did the searcher find what they were looking for? What was in the flat package Wright brought home, put in the safe, and which has now disappeared [& was that the object of the search]? Why did Wright make all his diary entries in cipher? Will its secrets tell them who the murderer is?

I'm afraid I wasn't quite as taken with this as Kate at Cross Examining Crime (see her linked review). It's a perfectly good example of classic crime fiction and I will admit that the locked room incidents were interesting. I also have to admit that murder by ancient weapon is a nice touch. Those looking for interesting elements have plenty to enjoy--from the aforementioned locked rooms to the murder methods to encrypted diaries that will reveal the motive...once Professor Westborough cracks the code. Sounds great, right? But..I just didn't enjoy it as much as my very first Clason book, The Purple Parrot. The characters didn't pull me in this time--honestly, none of the suspects appealed to me much at all--and I don't believe Clason played fair with us.

A few things bother me about the solution. First, unless I missed it, there is no adequate explanation of how our murderer was acquainted with the third victim. It certainly wasn't fair play to spring that on us at the end. Without the knowledge that those two people knew each other, there's no real reason to suspect the murderer beyond a small incident at the beginning. And it all hinges on them knowing each other. Without that relationship, the incidents that lead to the murders don't happen. Second, the first locked room mystery isn't explained. Four items disappear from the room--the first victim's billfold & watch, the key to the door, and a dagger. Three of these items show up again. But the key--that vanished into the ether apparently. And none of our detectives seem bothered about it. We're told that the victim's billfold and watch were taken to make the death look like robbery. That's nonsense. What burglar kills his victim in such a bizarre fashion and then locks the door behind him? Why create an impossible crime if you wanted it to look like robbery?

And, finally, how did the murderer know when the second victim would make their exit from the second locked room? There's no mention that the intercepted note said anything like: "Bring me items X, Y, Z at such and such time. I plan to get out of the house at exactly 9:20 p.m." [If that's supposed to be the way the murderer found out, then Clason should have said so in the denouement, at the very least.] Was the reason the victim was leaving the house because of an appointment with the murderer? Or did they stake out the place all day?  The narrative seems to indicate that the murderer was otherwise occupied.

Professor Westborough is entertaining as always--I do like an academic sleuth. And, if I have to choose one of the suspects as a favorite, then it would have to be Martin Wright--purely because he gets on Lieutenant Johnny Mack's nerves with his highfalutin college talk. ★★★

Last line: Julian inserted his forefinger into the circlet of openings at the base of the telephone.