Mrs. Jeffries On the Ball 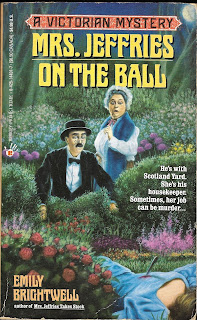 Mrs. Jeffries On the Ball (1994) by Emily Brightwell (Cheryl Lanham)

In the fifth Mrs. Jeffries mystery set in Victorian England, our detective housekeeper and the rest of the servants in the home of Inspector Witherspoon are drawn into another murder when Inspector Witherspoon attends a society ball during Queen Victoria's Jubilee. The ball, hosted by the Hyde Park Literary Circle. was to feature a literary contest with poems focused on the Queen and the awarding of prizes. But the poems never get read. One of the Circle's members, Hannah Greenwood, is stabbed and then shoved off a balcony before the first word is read. Since the inspector was on the spot, the case is given to him and his faithful staff start doing what they do best--tracking down clues among the servant class that will lead to a society arrest.

Hannah Greenwood was not a popular lady. She was judgmental and apt to stir up gossip about those she disliked. She had threatened several of the Literary Circle's members with scandalous revelations...so the suspect list is as long as the membership subscription. The deeper the investigators dig, the more motives they find...but the difficulty is to find a suspect with the opportunity. It isn't until Mrs. Jeffries witnesses an unrelated action that she realizes that they have been looking at the puzzle from the wrong angle and all the pieces begin to fit together.

For those of us who like historical mysteries set in the Victorian period, the Mrs. Jeffries series offers cozy, comfortable bits of fluff with a lovable set of characters. The mysteries aren't terribly complicated and I knew who and why pretty much from the beginning. But I don't really read these books for the puzzles. I read for the setting and for the people who make up Inspector Witherspoon's household. They're a fun bunch with each member bringing certain talents to the table--enabling them all to participate in the investigations without giving the sense that there are "too many cooks" stirring the pot. Given the rather formulaic plots, this isn't a series that I can read one after the other. But they are pleasant to dip into every once in a while--when I'm looking for something soothing and easy to read. ★★★

First line: The woman was no better than a common streetwalker!

Lucinda Marlow could be a danger to him, and he'd best remember that. She was the one who'd started the group. Unlike most females of his acquaintance, she actually read books. Worse, the poem she had written and read to the circle at their last meeting hadn't been half-bad. (p,2)

Last line: This is the last time I'm going to miss me a murder.

Deaths: 3 (one stabbed; one hit by train; one natural)