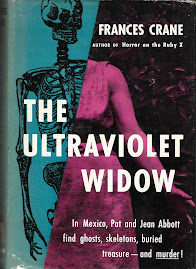 The Ultraviolet Widow (1956) by Frances Crane
Pat and Jean Abbott are at it again. Off on vacation to Mexico where they want to sprawl in the sun, catch some fish, and go hunting, they land themselves in the middle of a mystery that has everything from a pale, luminous ghost to ancient fossils to buried treasure...oh, and of course...murder.
They encounter Mrs. Howe, a woman from their neighborhood back in California, and she invites them to Alamos. A quiet little town with quick access to the kind of hunting that Pat has been looking for. While there they are introduced to the Van Gilder family--Nora Howe's daughter Marta and son-in-law Rex Van Gilder as well as their house guest, Audrey Peters. Audrey is a wealthy widow and Rex Van Gilder has her lined up to be his next wife. Also in the household: Eileen Kerry, Rex's niece and ward; Dale Owen, a geologist who's sweet on Eileen; a dictatorial housekeeper by the name of Bessie, and Jack Quitos, Van Gilder's sinister air pilot.
The Van Gilder house comes complete with fossilized skeletons, a deep well leading to tunnels full of of fossils, and its very own ghost. But the ghost is very well-regulated and well-behaved. It appears rarely and when it does it always appears at a few minutes after midnight and just briefly at that. It's like it doesn't want to bother anyone. It appears at its appointed hour on the night Audrey Peters is sent to her death down the deep well. After the murder, when everything else is in an uproar, it appears at an odd time and everyone has to wonder if it has anything to do with the murder. Of course, if Pat and Jean hadn't been on the spot, nobody would have known it was murder.
The Van Gilders and the local doctor are sure that the drunken woman just stumbled into the well and fell to her death. But Pat's quick eye soon picks up on the clues that indicate that Audrey had help into the well. When the police are convinced of foul play, they believe that only Marta, who was about to be ousted as Rex's wife, had a motive. But Audrey had a quarrel with Jack Quintos not long before. And maybe Audrey had changed her mind about marrying Rex after all. Audrey had also signed some kind of document which needed witnesses (a new will?)--but the envelope with the paper has disappeared. And maybe Bessie wasn't keen on her employers choice in a new wife (not that she cares much for Marta either)--in fact, maybe Bessie had hopes of getting Rex all for herself.
The plot moves fast through a second attempted murder, the discovery of a historic treasure, and the secret of the ghost's odd appearance--ending in a flurry of burned evidence, an attempt on Pat's life, and a an old-fashioned shoot-out. But Pat and the local police finally get their man...or woman.
This was one of the strongest of the Pat and Jean Abbott series I've read. Not quite as humorous and/or light and breezy as the North books and Jean isn't as quick-witted as Pam North. But she's definitely better at staying out of tight places and is quite good at getting Pat out of difficult situations (such as a well that's being filled in--with him in it!). This particular outing sees the couple working together quite well as a team. The mystery isn't complicated and clever readers will spot what's really going on with all that fossil hunting fairly quickly. A good, solid read. ★★★ and 1/2.
[Finished 5/31/21]

First line: It isn't everyone who gets to see a ghost, even in Alamos, Sonora, Mexico, where legend has them as plentiful as the handsome arches of the old Spanish-style palaces.

Last lines: I had never in my life seen Patrick shoot a tigre. In fact, I had never seen a tigre.

Deaths = one pushed into well