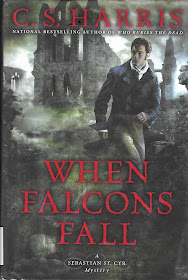 Sebastian St. Cyr, Lord Devlin, his wife Lady Devlin, and small son travel to Ayleswick-on-Teme so Devlin may deliver a final gift from Jamie Knox to his grandmother and so the nobleman may continue his quest to find answers to questions about his own ancestry. But they have barely settled into the inn in the small village when a young woman's body is found by the river. An empty laudanum beside the body makes the constable think it is suicide, but the young Squire who is new to the role of justice of the peace senses that something is amiss. Devlin's reputation for criminal investigation has preceded him and Squire Rawlins asks for his help in investigating the death.

It soon becomes clear that Emma Chance. who claimed to be a young widowed woman on a sketching tour, was more than she seemed. With Napoleon Bonaparte's exiled brother and family in the neighborhood, is it possible that she was a spy keeping an eye on the French entourage? But her interests seemed to be more focused on the history of people (men in particular) of the Shropshire village and there's a question of her own heritage. Did she unsettle someone on a more personal basis? And then there's the smuggling operation of a certain major--perhaps she was killed because she inadvertently stumbled across something to do with that...The deeper the investigation runs, the more questions Devlin and Rawlins have. And the more death stalks the village. Since Emma's questions revolved around the past, Devlin realizes that they must also look to the past to find a very present killer.

This is the eleventh book in Harris's highly entertaining historical mystery series. Each one could be read as a self-contained mystery, but there is an over-arching story involving Devlin's personal history that encourages readers to read the series in order for best effect. The book should not ruin any previous mystery plots--but it will take the surprise out of a few of the twists in Devlin's own story. And Devlin's story is a very interesting one as are the stories of the recurring characters.

Harris does an excellent job combining historical facts with her mystery plots. Sometimes the history is absolutely integral to the mystery and sometimes it merely provides background and red herrings, but it is always entertaining and educational if you don't know much about the Regency period. This particular mystery makes use of the historical facts in a very nice way. As with historical novels written by a modern author, it is difficult to keep anachronisms out of the text--but I notice fewer in Harris's work than is often the case. And they are even more rarely jarring when I do notice them.

The mystery plot in this one was also done very well. I generally spot the villain of the piece--even if  I don't have all the details of motive sewn up. But this time, Harris kept me guessing till the very end. A very satisfying entry in this long-running series. ★★★★ and 1/2.

First line: It was the fly that got to him.

That's what haunts this place, he thought. It's the despair and anguish of the monks who poured their energy and joy, their very lives, into this monastery, only to see it destroyed. (p.145)

Last line: So I guess that narrows it down a bit, doesn't it?" she said, her gaze meeting his as a tentative smile curled her lips.

Deaths = 13 (one poisoned; one shot; two fell from height; one drowned; two natural; two accident; two hit on head; two stabbed) [some are from the past]