The Predator of Batignolles (mini-review) 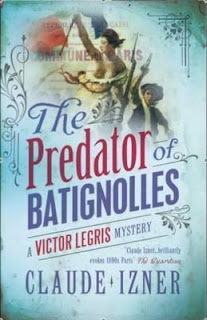 Victor Legris has once again promised Tasha, his lover and, hopefully, soon-to-be wife, that there will be no more investigations into murder. His last adventure nearly ended disastrously for both himself and his mentor/partner Kenji and she doesn't want him getting killed like the proverbial curious cat. But, of course, it's difficult to resist when murder strikes one of his and Kenji's friends--a bookbinder who was repairing a very valuable book for them. It's also hard to resist when Joseph, the bookshop's assistant, keeps bringing interesting tidbits to Victor's attention and it becomes apparent that the fire at the bookbinder's is part of a series of inter-connected crimes. But who is behind the murders that include an actor, a book-binder, a printer, and a policeman? What motive could include such a variety of victims? And what do the messages left behind at each scene mean? Literary messages that refer to a mysterious leopard. As Victor and Joseph investigate, they find ties to events which took place many years ago. And it seems that someone is exacting revenge for some of the terrible actions during the Siege of Paris.

As with the previous four books in this series, I wanted to like this a lot more than I actually did. It seems like it should be good. The setting of Paris at the end of the 19th century is appealing. The plots have the makings of a good story. But each time they fall flat. I don't know if the fault is in the translation from the French or if the storyline is really as scattered and ragged as it appears in English. But scattered, it is. We have scene breaks that aren't indicated. One moment we're with one set of characters in a certain place and in the next paragraph we're somewhere else with someone else. Some sort of indication would be nice--a decorative symbol or two to indicate that there's a change coming. Something.

Also, in previous reviews I indicated that I'd be a lot happier if Joseph were the amateur detective and we could skip Victor. Victor, despite the fact that he lies to Tasha about getting involved because he just can't stay away from mysteries, just doesn't seem to be really invested as a detective. He's compelled to get involved but then he's not really all that into it and he's not all that great at it, either. He stumbles across clues and somehow manages to run into exactly the right person to talk to--but it just happens, he doesn't really investigate properly. Joseph takes investigation much more seriously...in general. But even Joseph seemed lacking in this outing. Maybe because the course of true love had gone awry (he's in love with Kenji's daughter and they've had a tiff) and his mind isn't entirely on the job.

Even the fact that there was a pretty nifty twist at the end couldn't save this one for me. I'm very glad that I only have one more sitting on my shelf (and only one more needed to complete my target for the Six Shooter Reading Challenge). Once that's done, I won't be returning to Victor Legis's Paris again. ★★ --for setting, the basic plot, and the ending.

First line (prologue): A window opened on the second floor and the light glancing off the panes caught the attention of a passer-by.

First line (chapter one): The train deposited a dozen punters in striped pullovers and straw boaters on the platform before letting out a long jet of steam.

Last line: "As for me, I'll be hiring a cleaning lady, that's for sure!"

Deaths = 5 (two stabbed; one burned to death; one gassed; one shot)

What a beautiful cover.
www.rsrue.blogspot.com