The Judge Is Reversed 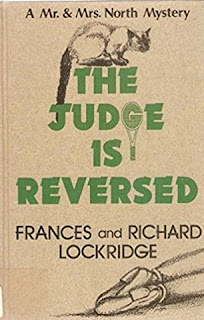 The Judge Is Reversed (1960) by Frances & Richard Lockridge

John Blanchard was an expert on many things from law to cats to tennis to bridge. One of those activities might just have made him an expert on being a murder victim. As an expert on cats and tennis, he had served as a judge for cat shows and a line judge for tennis. His most recent outings in both arenas had caused a bit of commotion--from being accused of bias by Rebecca Wreuth, owner of Morland's Enchanted Lady of Purrland, at the Colony Cat Club's championship show to accusations of deliberately spoiling the pro chances of Doug Mears at the Forest Hills tennis championship tournament. His interest in animals and law has him crossing swords (verbally) with Floyd Ackerman in the Times letters to the editor. Ackerman is a rabid anti-vivisectionist and has taken great exception to Blanchard's latest response. As a bridge player, Blanchard regularly sees his old friend Graham Lantham. He also sees a great deal of Lantham's rather pretty daughter, has hopes of marrying her, and has already made a rather generous provision for her in his will. And, though he no longer actively practices law, he still has his hand in as trustee for a few estates--one of which has produced some difficulties in settlement.

When Blanchard is discovered in his home with his head bashed in, Captain Bill Weigand is given to wondering which (if any) of the dead man's interests have led to his death. And, of course, much to the dismay of Sergeant Mullins, the Norths are in it and bound to make it screwy again. Blanchard was discovered by the veterinarian who had come to give one of his cats a shot. Mullins, already uneasy about the cats, had looked askance at the odd little man with green pants and red coat and been a bit reluctant to believe his claims. When asked if anyone could verify his identity, Dr. Gebhardt had told him to

"Call them up and say you've got a bald little man with eyebrows, wearing funny clothes who says he's Dr. Oscar Gebhardt, a cat specialist. Ask them if they've ever heard he goes around killing people....all right, call some people named North. Mr. and Mrs. Gerald. They just might--" He stopped because Mullins's face had changed. It seemed to Oscar Gebhardt, D.V.S., that it had changed for the worse.

Of course, the Norths were already in it, so to speak. Pam, who was "sampling cats" in her search to find a successor to their beloved Martini, had observed the argument between Rebecca Wreuth and Blanchard over his inability to recognize that Enchanted Lady deserved a blue ribbon. Pam and Jerry, tennis enthusiasts, had been on hand to see the heated response of Doug Mears to Blanchard's interpretation of the foot fault rules in tennis...and the subsequent altercation in the refreshment area when Doug also seemed to take great exception to Blanchard's attentions to Miss Hilda Latham. As Pam tells Sergeant Mullins (and Weigand) later when they've come to identify Dr. Gebhardt, "We knew Mr. Blanchard was going to be killed." Well, not exactly--but they did notice that he had a tendency to collect opponents, if not enemies. Weigand will have to evaluate the opponents and judge which one earns the blue ribbon in murder.

This is, I think, a strong entry in the last few books of the Mr. & Mrs. North series. The focus is actually more on Weigand and the police procedure and less on Pam North and her attempts to detect. She winds up mixed up in the middle of the denouement, but her mission is entirely different. Of course, her penchant for noticing things and then, unthinkingly, blurting out what she noticed to the wrong person puts her in danger, but we know that the cavalry (in the person of Bill Weigand) will ride in just in time to prevent her untimely demise.

The mystery is fairly light-weight, but I find these books so much fun that it's nice to know that there's a nice comfortable read ahead with no heavy-lifting needed. Just perfect for a rainy day's read. ★★★★

Kate over at Cross Examining Crime has also reviewed this one. Please check out her blog.

First line: There was, Pamela North said, no use waiting to be adopted.

Pam did not repeat, but only waited for seepage, which she assumed to be inevitable. Momentarily, her words lay on a mind's surface, like drops of water on dry soil. They would penetrate. (p.7)

He looked at his watch then, and said, "Good God," in  a tone of surprise. Always, Pam North thought, he felt the same surprise, expressed it so. And always at about the same time of morning. It is pleasant, Pam thought, to be sure of things. It provides continuity. (p. 8)

Sergeant Aloysius Mullins, of Homicide, Manhattan West, was in a somewhat disgruntled mood. Several things irked, one of them being that this looked like turning into a big one--the kind the inspector would ride herd on--and for the moment Mullins was the herd which would be ridden. (35)

It was really the cat part of it which preyed on Mullins's mind. The rest could be endured; would have to be endured....But cats were too much. For Sergeant Mullins, cats are always too much. and it sometimes seems to him that he is dogged by cats. (p. 35)

...it might, if Pam was right, give them some measure of the dead man. It is always desirable to measure the violently dead; it is seldom easy. (p. 50) 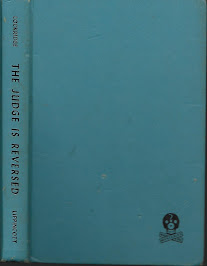 "We wouldn't do a thing like that." Which, of course, is a statement often made--with every evidence of shocked sincerity--to policemen. But not exclusively by those who are innocent of doing things like that. (p. 102)

Hence, the slow business of filling in was going on elsewhere; the slow, careful business of asking people who had no part in any of this whether they had seen any part of it. (p. 148)

Last line: "I do hope," Pam North said, "that nothing drastic happens to that judge."

Deaths = 3 (one hit on head; one strangled; one pushed down stairs)

Thank you for the mention. I have always liked the idea of the Norths but when I never manage to enjoy them as much as I want or hope to.