A Tasty Way to Die 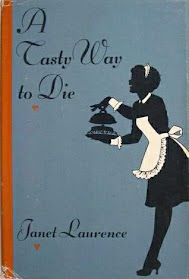 Darina Lisle, talented professional cook and recent heiress to her cousin's estate, is looking to sell his Chelsea house and find a country house that would make a nice, small hotel. She's always wanted to own such a place and now she has the chance. But her plans are put on hold when she runs into an old friend from her cookery course days. Eve Tarrant is now co-owner of one of the most exclusive catering businesses in London--The Wooden Spoon--and the business has recently expanded to include cookery demonstrations with hopes of a television show. And Eve is currently in need of an extra set of hands. Her partner seems to have fallen victim to a gastric flu. In an effort to help out a friend, Darina agrees to do what she can with the catering and demonstrations until Claire Montague is well again.

But Darina finds herself in the middle of a second murder investigation* when Claire dies and it's determined that her death was caused by a poisoned mushroom which somehow found its way into the starter at a luncheon provided by and for The Wooden Spoon staff and their associates. Darina begins to suspect that real target was Eve--especially when she finds out that the two women switched their seating arrangements at the last moment. It seems that the mushroom must have been gathered during an educational walk put on by one of the luncheon's guests--Ralph Cox, an expert on mushrooms. So access to the deadly fungus was had by all, but finding out who could have managed to slip it into just one serving proves to be difficult. Motive is a different kettle of fish. Claire appears to have been loved by all. If she was the intended target, it's difficult to see why. Eve, on the other hand, can be a bit dictatorial in her management and doesn't seem to realize how often she's taking advantage of her friends. As her amateur investigation continues, Darina discovers that there are secrets that may provide other motives...some which indicate that Claire may have been the intended victim after all....

This is a decent cozy mystery. The motive is a bit muddled...like an over-large cake, it has too many layers...but all of the various parts are explained lucidly enough. I did have a bit of difficulty getting into the story, Darina is a likable protagonist, but her involvement in the mystery seemed very contrived, especially her efforts to help out Eve with the business. It's not like she and Eve were bosom pals, but she continues to allow Eve to impose upon her long after I would have gotten myself out of there (well before there was a murder to solve). Darina makes it sound like she'd be letting her best friend in all the world down if she didn't keep helping out. The culprit was also fairly obvious to me early on. This wouldn't have mattered quite so much if the story overall had been more gripping. However, the ratings on Goodreads are much stronger (a large number of four and five stars), so your mileage may vary. ★★★

(*The first involved the death of her cousin in A Deepe Coffin.)

First line: The demonstration was slipping out of control.

Darina wondered if he was shifting around odd snippets of conversation, trying to make an idenfifiable pattern. It was she supposed, a form of detection, like upending a detail to see if it would reveal something different if looked at from another angle. [p. 25]

Last line: The wine glass fell onto the carpet and the coffee cooled beside the fire.