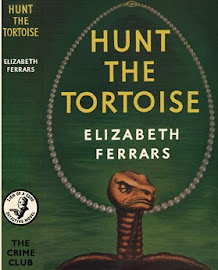 What's wrong with everybody? What's in the air? Canadian divers and treasure ships, ungrateful sons and anxious parents, voices that talk in the night about mortal terror, Frenchwomen who think that England and France should be one nation, lucky tortoises, husbands who are afraid of their wives talking to me in case they say what they shouldn't...Is that what one expects to find when one comes on a holiday? (Celia Kent; p. 66))  ~Hunt the Tortoise (1950) by E. X. (Elizabeth) Ferrars

It's been nine years since Celia Kent has been to the Hotel Bienvenu in La Marette on the French coast. The last time she was there, she wasn't alone and had been the closest she had ever come to complete happiness. But then the war came and took that happiness--and the man she loved--away from her. She has returned in order to lay the ghost to rest. But it's difficult to find the peacefulness needed to lay ghosts when the atmosphere seems so uneasy. She expected changes after the war but she didn't expect the tense atmosphere that seems to affect everyone from the elder Oliviers who own the hotel to their son and wife who now manage the hotel to mixed bag of guests staying at the hotel.

Celia wonders just what has destroyed the pleasant atmosphere of the hotel--it seems little changed from what she remembered (despite needing sections rebuilt after war damage). Is it the fact that Jacques Olivier seems to have more on his mind than his beautiful wife and running the hotel business? Or that his parents are displeased with the way he and his wife "manage" the hotel that represents their life's work and savings? Maybe it's the Armenian black marketeer who seems afraid of more than the French authorities. Is the stockbroker who has installed himself, wife, six children, and his lucky tortoise really what he seems to be? Or is his family vacation a cover for something more sinister? What about the "Swiss" guests who seem to live through each night in mortal terror? Or the diver who's in search of sunken treasure? And then there's that nice young Englishman who claims he was on a walking tour--but who goes on a walking tour toting twelve volumes of Proust?

Celia is caught up in the middle of a whirlwind of lost jewels, smuggled "goods," missing guests, and, finally, murder. After an altercation with Jacques Olivier, Pierre Jamais (the diver) is found stabbed with a harpoon. At first, it seems that Jacques is the most likely suspect. But then everyone begins talking about a man called Patrice who was seen in the area of the quay shortly before the murder. But Celia doesn't know what to think. She aligns herself with Michael Butler (the nice young Englishman) even though she senses that he hasn't been completely honest with her on certain points. But they don't really work together in traditional detective duo fashion. Michael pursues his own line and Celia finds herself coming across bits and pieces of clues almost accidentally. It isn't until she shares her information with him in the final chapters that he sees who really was behind the killing--not only of Jamais, but additional murders which follow.

Ironically, Celia and Michael don't get to present the local police with a solution. The inspector and his men have been quietly working off-stage and have had their sights on the culprit all along. I think perhaps this is my main quibble with the book--if the officials are going to solve the case, then I would expect to see more of them in the story. But we don't. We have two encounters with the police. They question everyone about the events of the evening of the murder--but we only see the interview with Celia. And then later the inspector (or whatever he is--he gets no name, just a description: "the sallow-faced man in the crumpled suit") overhears a conversation between Celia and Michael and asks a few more questions. That's it.

Despite this quibble, I did enjoy this one more than other stand-alone novels that I've read by Ferrars. I've tended to like her series with Andrew Basnett, retired professor of botany, much better than her stand-alones. Hunt the Tortoise has a number of excellent points to recommend it. First off, the atmosphere--the hotel and the surrounding area make a great setting and Ferrars manages to emphasize the uneasy atmosphere by balancing it against the beautiful coastal setting. The mystery is well-plotted and gives the reader some surprises--even in the choice of victim/s.

Another thing I appreciated was the way that post-war life is portrayed. The effects of the war touch nearly everything in the story and they have more presence than has been evident in many of the mysteries I've read from the same time period--but it's all done without seeming to be overdone. Through conversation we are reminded of rationing in England and how the prices of everything in France has gone up. Descriptions of the destruction Germans (and, sadly, Allies) left behind them as the war ended are woven naturally into the narrative. The once fashionable Hotel Mistral is described as now shuttered with cracked walls, and peeling paint. "War had closed the Hotel Mistral and, without scarring it with bombs or gunfire, had left it a ruin." 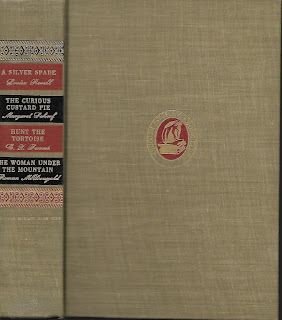 The last thing I'd like to emphasize is the way Ferrars handles the relationship between Celia and Michael. In so many mysteries (and fiction in general), a couple meet up, get involved in and/or solve a mystery, and are falling into one another's arms with wedding bells in the near future by the last page. Ferrars ends this one far more realistically. There's a sense that these two might get together, but there's nothing definite about it. He's headed off to wrap up some loose ends on his official business and says "I--I might come back--in certain circumstances." But Celia says nothing. Then when he says it again a bit later, she nods and he just walks off. And Celia turns "back to the bay and [stands] there, trying to sort out a confusion of feelings." It's obvious that these two have a ways to go if anything romantic is going to happen. It's a very refreshing denouement for the relationship side of the story.

Overall, a very good read and a recommended start for someone looking to read a Ferrars stand-alone novel. ★★★★

[I own this story in the four-in-one volume by the Unicorn Mystery Book Club--pictured above right.]

Kate at Cross Examining Crime has also reviewed this one--we had very similar responses to the story.

First line: When the train stopped at La Marette, Celia Kent climbed down to the low platform and stood still, looking curiously around her....becoming aware of the warm fragrance of pine, tamarisk and rosemary in the air, she realised that a scent can startle any memory into life again, and bridge a lifetime of forgetfulness.

"As to that, in my opinion, people don't change" (Jacques Olivier) "Ah yes, they change. Their characters can be quite altered. They can be corrupted....I know what I'm talking about. I know the good can be destroyed by the evil." (Madame Olivier) [p. 28]

Every time he makes a deal on the stock exchange, he rubs her shell, and that, he says, makes the deal turn out a success. A valuable animal--I wish I had one like her, but I don't know how one tells a luck tortoise from an unlucky one. (Madame Olivier; p. 30)

Something about that look and the discovery that someone unknown was standing close behind her gave Celia a shock that felt almost like fear. she felt her skin prickle. It was as if something evil had come close to her. (p. 31)

I have stayed in London once and my husband knows it well. He was there as a student. He says it affected his ideas profoundly. But that was many years ago, when the world seemed a more hopeful place than it does now. The only fortunate people now are the indifferent ones, and even they need courage. (Madame Marton; p. 64)

I always talk too much. I can't help it. Sometimes I think I only feel real when I'm talking. (Madame Marton; p. 65)

...generally speaking, the farther south you get in any country, the less you should believe. (Michael Butler; p. 74)

We've all seen horrible things. I've seen things I shall never forget, but it's no good thinking about them. We all have to go on living...it's no good letting oneself get depressed. (Madame Tissier; p. 129)

The place [Hotel Mistral] is a ruin. It's always a mystery how such things happen, but if the soldiers of any nation are quartered in a big, empty house like that, they destroy it....The state of the place is something you'd hardly believe. Why grown men do such things is hard to understand." (Monsieur Olivier; p. 131)

Isn't it a good thing sometimes, however worried one may be about the future, to forget about it and hang coloured lights everywhere and dance. (Madame Marton; p. 144)

Last line: Genevieve was staggering along the terrace, happily shaking a bottle with a few pieces of gravel in it and smiling at everything she saw.

Thank you for this review. It sounds like a very intriguing book - and I had not heard of this author. I will be adding this title to my TBF file! - Rick