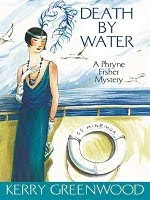 Death by Water by Kerry Greenwood is a cozy little installment of the grownup's Nancy Drew, Phryne Fisher. This mystery series is set in 1920s Australia and stars the Honorable Phryne Fisher--rich, beautiful and smart child of the Jazz Age. Like Nancy, she can keep up with the men and boys and give as good as she gets. She can handle a pistol and herself in a fight. She drives a beautiful, fast car and can fly an airplane. She swims like a fish and can dance all night. And she run circles around any criminal who comes her way while making time to make time with the most eligible of the available bachelors. She sounds improbable (and probably is) but Greenwood tells such delightful stories with such beautiful writing that you just don't seem to notice.

This particular adventure is more in the cozy line than previous Greenwood mysteries that I've read. In this story we have the closed circle of suspects...Phryne has agreed to go on a cruise with the P&O Line to try and track down a jewelry thief. When mystery and mayhem let loose, there is a limited number of people who could be responsible and, like those snow-bound country house mysteries, the suspects have nowhere to go. Unless they want to take a very long swim. Shipboard romances abound. There are jealous husbands and down-trodden wives; an erotic photographer and jazz musicians. Before it's all over someone will slip Phryne's companion, Dot, a mickey finn and attempt to do the same to Phryne. There will be a murderous attempt on Phryne's life and then the murderer will succeed in dispatching the most unlike victim. And, in the end, Phryne will hand over both the murderer and the jewel thief/thieves to police to the accompaniment of pate, toast and truffles.

A gorgeous, sumptuous, delightful read. Just the thing when you want something light that's well-written. Kerry Greenwood slips in profound, literate statments in between the jazz and the truffles. I find the most interesting and thought-provoking quotes in her zesty, fun mysteries. Four stars out of five.
Posted by Bev Hankins at 8:00 PM

I keep seeing this series pop up everywhere! Thanks for the review...I really need to give this series a go. I'm sure I'll love them :-)