Alphabet in Crime Fiction: The Letter A

Back in December I signed up for The Alphabet in Crime Fiction, a community meme sponsored by Mysteries in Paradise. Each week she'll be expecting participants to produce a post featuring a mystery/crime novel or novelist related to that week's letter. We're off and running on Monday, January 10th with the letter A. 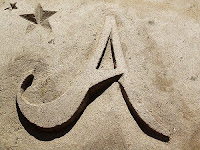 I'm hitting the alphabet from both sides with And Then There Were None (aka Ten Little Indians) by Agatha Christie.

From the frontispiece (of this edition--which is also mine):


Their host was sudden death!


Ten house guests found themselves trapped on an island--the prey of a diabolical killer. The first guest was poisoned after dinner. The second just didn't wake up in the morning. When the general was clubbed to death, they realized that the murderer was one of them. As their number grew smaller with each killing, their terror mounted. Was there no way out? Somehow, soon this vicious killer would have to be caught--before he had the pleasure of announcing: "and then there were none."


This is my all-time favorite Agatha Christie novel. Even though I've read it many times, I still get nearly the same pleasure from it each time I reread it. Of course, the pleasure would be complete if I could conveniently forget the solution--but the story is told so well that I don't mind knowing ahead of time what will happen. I have had an ongoing practice of telling my friends whenever I find out that they plan to read this one, "If you can honestly tell me that you figured out who did it before the end of the story, I will buy you dinner--wherever you want to go." Twenty-five years and counting....I have not had to pay up yet.

Bev - What a great choice for the letter A. And thanks for highlighting one of my favourite Christie novels (and, so it is said, one of her personal favourites). I agree that it's a terrific mental challenge (I've never known anyone either who guessed the murderer before the end). Thanks for reminding me of this great book.

I re-read a diffent Agatha Christie for letter A and our sentiments were very similar. " ... the story is told so well that I don't mind knowing ahead of time what will happen .." Well said!

Many others are vying for a re-read too, including And Then There Were None.

Yeay for Chistie! And Then There Were None is one of my favorite Christie's books of all time. It was well-written and very intense. Throughout the book I grew sympathy toward Vera despite the fact that no one is innocent in that island.

That's so awesome, about the dinner thing. :D I absolutely loooovvveee this book~! I couldn't stop thinking about it after I read it. Definitely a MUST for any Mystery fan.

Dead On. Even though I too have read it a number of times, I still find the plot gripping and the characters fascinating.

You could submit this too the Agatha Christie Blog Carnival too. Submission here

Nice choice! One of my all time favorites, too. I still get chills just thinking about the book!