This week we are featuring the letter C. And I say that "C" is for The Casino Murder Case by S. S. Van Dine.

I read The Casino Murder Case by S. S. Van Dine back in June 2010. The saddest part about having found & read this very hard to find Golden Age story (one of the treasure trove from a week's book bonanza) is that I think I only have two more Philo Vance stories to read before I'll be all done. Another delightful series finished. I'll be in the same state as when I realized I'd read the very last Lord Peter Wimsey. "What do you mean there aren't any more???"

I can always count on Philo Vance to deliver the goods in his detectin' (his lack of "g," not mine). In this story, Philo Vance receives an anonymous letter alerting him to the possibility that violence will soon be done within a well-known family, and the letter also suggests that something of interest will take place that night at the casino. Vance attends and witnesses the collapse of the son and heir to the family fortune, a heavy gambler, due to his having been poisoned—immediately after he drinks a glass of water from the casino manager's private decanter. At approximately the same time, across town, the son's wife, a former Broadway musical star, dies from poison. The curious factor is that the medical examiner cannot identify the way in which the poison was administered.

The casino story has a whiz-bang finish (to keep in line with the American genre of the time), but knowing Vance, I wasn't nearly as surprised as his companions were at how things wound up. I will say this (without giving too much away, in case anyone out there is dying to try this one out)...it's an interesting twist on the poison murder. Or at least an interesting twist on what the murderer wanted you to think had happened. I actually got the method before Vance did this time--unusual with these stories. Three and a half stars out of five. 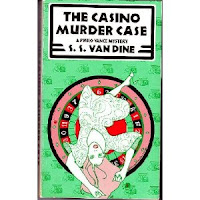 Bev - Thanks for this review. Philo Vance is a great sleuth and one whom I confess I haven't paid as much attention to as I should. Thanks for reminding me of him. This sounds like a good read, too.

I have to admit that I have never heard of S S Van Dine, and that you have made me very curious. The library can't help but Amazon has a kindle bundle for around £5, and if anyone takes my hints about what I'd like for my birthday I shall be very tempted!

I only knew of Van Dine because of his rules (he was the one with twenty rules, wasn´t he?), but of course he has also used them in writing :D