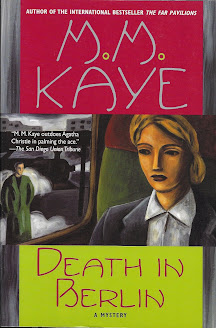 Miranda Brand is returning to Germany with her cousin Robert, his wife Stella, and their daughter. Miranda will be on a month's holiday and Robert is being stationed in the British half of the recently partitioned country. She doesn't remember much of Germany--having escaped from the country early in World War II after her parents were killed in an accident. While on the journey to Germany, they meet Brigadier Brindley who tells his fellow travelers an incredible story of runaway Nazis and a missing fortune in diamonds--a story that the young Miranda apparently took part in unknowingly. The entire party is fascinated by the tale...but someone has more interest than they let on.
The Germany-bound group (12 in all) board a train en route to Berlin and during the night, the Brigadier is stabbed to death. He had made it known that he didn't sleep well on trains without medication and so the killer knew Brindley would put up no resistance. Miranda and all of her traveling companions are suspects....but Miranda, who discovered the body when she inadvertently entered the wrong compartment, is the one who has blood on her hands.
Simon Lang, a soft-spoken British policeman stationed in Berlin, is also on the train and winds up commanding the investigation. Miranda is sure that he's fixed upon her as the primary suspect, but there's plenty of suspicion to go around--especially after more murders occur.
Though this is the second of Kaye's mysteries, it is the last one that I needed to read to complete the series. The others were much easier to find for some reason. Overall, I was pleased with the story. Kaye gives us an excellent view of Germany in the post-WWII era before the Berlin Wall was erected. Since her husband was posted there during this time period, she was able to give us the benefit of her first-hand experience. She has always been very good at getting place and atmosphere right and Death in Berlin is no exception.
The primary mystery is also interesting with its ties to Nazi Germany and the motives behind the initial killing are quite sound. I do have a couple of minor quibbles (see spoiler portion of the review if you're curious), but did enjoy watching Simon Lang unravel all the threads. I did pick up on some of the solution (Kaye hits us over the head a bit with one particular clue...), but missed how other bits featured in the pattern. I blame that on the second part of my quibbles below.  I'm definitely glad I finally found this and was able to finish the series. I do wish I had been able to read them in order because I think her mystery plots improve over time and my expectations might not have been as high for this one. ★★★
***********Spoilers Ahead. Read at your own risk************
I have two primary complaints about Kaye's book, one is the amount of coincidence in the story. The Brigadier just happens along and tells his story--to the very group of people that has not one, but two participants in it. Miranda (who had long forgotten the details of her escape from Germany) and the killer (who most certainly had not forgotten). Then another of the group of suspects just happens to run into their long-lost relative and that throws a few red herrings about which interfere with the smooth investigation of the crimes.
My other quibble is that we have two murderers. The motives loosely tie together, but not in a satisfactory way. If the primary concern was the Brigadier and his diamond story (as it seems to me it is), then I think it would have been better to stick to that motive for the murders. The other story line could well have served as a red herring, but adding in a second murderer seems to be a bit of....wait for it....overkill.
First Line: With nightfall the uneasy wind that had sighed all day through the grass and the gorse bushes at the cliff edge died away, and a cold fog crawled in from the sea, obliterating the darkening coastline and muting the drag of waves on shingle to a rhythmic murmur barely louder than the unrelenting and monotonous mutter of gunfire to the west.
Last Line: She shrugged her shoulders tolerantly and went downstairs to explain to her cook in what she confidently imagined to be German, that der Herr Polizisten Captain Lang would be remaining to luncheon.
***********
[Finished on 7/31/20]
Deaths = 4 (two stabbed; one drowned; one shot)
Posted by Bev Hankins at 12:38 PM