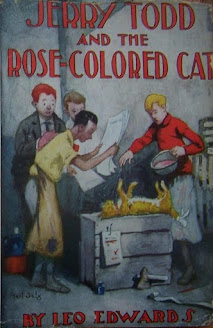 Jerry Todd and his pals (Red, Scoop, Peg, and Spider) get mixed up in a very catty affair. It's not just one rose-colored cat (which, by the way, doesn't mean red or pink as you might think). They wind up on the receiving end of 150 cats--of all shapes and sizes. They also find themselves involved in a case of missing pearls, two fires, and a mysterious prowler who seems awfully interested in their collection of cats.
The way it happens is this--Professor Ellsworth Stoner arrives in Tutter (home of Jerry and the boys) by train one afternoon. He seems a bit confused and when the cat he's carrying in a basket escapes and has a tussle with a couple of dogs, the boys help the professor retrieve his cat. That's when they learn that Stone has a dandy scheme to open the world's first feline (the professor insists on feline over cat) rest home. He's going to convince rich people who want to vacation without their precious pets to send them to him to care for at the rate of a $1.00 a week. He asks the boys if they'd like to help him set it up and promises to pay them all $5.00 a week.
They think it's a pretty good deal, so they agree. Jerry's dad even offers the old mill on his property as a likely site to set up business. The professor places an ad in the newspaper and soon the cats (er...felines) are arriving on all available trains. But there's a snag...the professor is an escapee from a local asylum and as soon as the institution gets wind of the cat scheme (one of the professor's idiosyncrasies is his fixation on cats), attendants are sent to bring him back. They have no orders to do anything about cats, so the boys are stuck with the animals.
Up till now they've gotten a lot of cats, but no cash. But then Mrs. Kepple sends a message with $10.00 telling them her prize-winning, rose-colored cat, Lady Victoria, will be arriving soon. Mrs. Kepple plans on visiting the local sanitarium for a rest cure of her own and will collect her cat then. The cat that arrives doesn't look so special to Jerry and the gang--she's a yellow cat who looks like she might have been picked up in alley somewhere. And she's got a strange copper collar with weird bumps on it. Somehow the cat links in with the prowler and the pearls and Jerry and his friends manage to put all the clues together and save the day in the end. 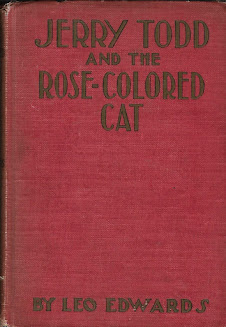 This was my first introduction to Jerry Todd. He and his friends are quite a collection--they remind me to some extent of the Dead End Kids when they were younger. I enjoyed the camaraderie among the boys and their determination to see the thing through to the end. It was fun that their escapades didn't always turn out quite the way they planned (for instance, the trap they set to try and catch the prowler), but they never let that stop them. I knew right away what was going on with the cat, but I enjoyed watching Jerry and the boys figure it out. ★★★
First Line: The mystery part of this adventure really started the day we got Ms. Kepple's letter saying she was shipping us her famous rose-colored cat, Lady Victoria.
Last Line: Besides, with plenty of cats on hand there wasn't likely to be any rats to carry disease germs. But I guess it's pretty hard to please everybody.
Posted by Bev Hankins at 7:13 PM