The Murder That Had Everything 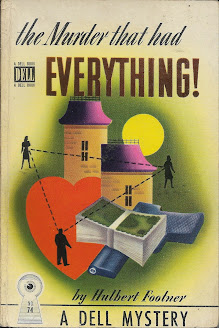 The Murder That Had Everything! (1939) by Hulbert Footner

Rene Doria is a smooth little customer who has come out of nowhere to become the apple of society's eye. His little bon mots are reported in all the newspapers. All the ladies think he's a dream...and he's about to marry the biggest fortune...er...the prettiest society girl in town. He's got it made. So, why does he take a powder just when it's all coming together? That's what Peggy Brocklin (aforementioned society girl) wants Amos Lee Mappin crime story author and sometime amateur detective to find out.

When Mappin discovers Doria's body at the bottom of his (Doria's) dumbwaiter shaft, it's apparent that Peggy's beloved didn't skip town. Who wanted him dead? Was it Peggy's daddy who disliked his son-in-law-to-be? Was it one of the ladies in his life who didn't want to give him up? Like maybe his wife? Or maybe a husband he crossed at some point? Mappin finds himself awash in possible murderers. But then other deaths pop up and it become apparent that there's more to this mystery than meets the eye.

The title is no lie. It does have everything--murder; blackmail; poor little rich girls; gigolos; missing money; a man who died by being thrown down a dumbwaiter shaft...no, wait, he was hit on the head...no, no, he was shot; people running in and out of the first victims apartment like Grand Central Station; and more red herrings than you can shake a stick at. It's all quite fun. I just wish it hadn't been so obvious.

I don't know if I've reached a tipping point with mysteries or I've just run into a few where the red herrings weren't red enough or herring enough to fool me. But it didn't seem like the villain and the motive were hidden all that well. As soon as the key bit of evidence appeared, I was suspicious and it didn't take long for the suspicions to solidify. Fortunately, I enjoyed the characters of Mappin and his secretary Fanny Parran enough that they kept the book rolling along for me. A good, solid story ★★★. If the neon lights aren't flashing at the culprit for you, then you might rate it higher.

Publicity is like a drug. You've got to take it in bigger and bigger doses to get any kick out of it. (Fanny Parran, p. 6)

I'm not telling myself that Slim is a king among men. I know what he is. Nor do I suppose this feeling is great love sent from heaven. I know where it comes from. I can see that all women except female icicles are affected by him in the same way. But it's deliciously exciting, Pop, and you know you have told us that we ought never to refuse the dish of life when it is offered. (Fanny, p. 173)

Everybody lies to the newspapers. It's expected of them. The only way you can cover your tracks nowadays is to tell the truth. (Amos Lee Mappin, p. 179)

Only have read one Hulbert Footner thus far (The Under Dogs) and enjoyed it a lot. I have found five other titles so I am starting him as a target in the Six Shooter challenge. This one sure sounds like a romp!

This was my first Footner. Great fun--I hope you enjoy the ones you've got lined up.