A Night in the Lonesome October 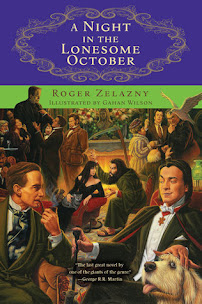 A Night in the Lonesome October (1993) by Roger Zelazny

It's October and your favorite classic monsters and things that go bump in the night are coming out to play...a brand new (to us) Game. A paranormal game that will either usher in a whole new reality (if the openers have their way) or maintain the status quo, if the closers get the upper hand. We've got our friend the Count and the good Doctor and his huge, hulking Experimental Man. And then there's Larry Talbot who sometimes appears as "Lucky" the werewol--er dog. Yeah...dog, that's it. We've also got Jack, a fellow who's pretty handy with knife, and a few other players who maybe aren't quite so familiar.

Speaking of familiars...each of of the players have a helper in the form of an animal. Jack's sidekick, and our narrator, is Snuff, the dog (who really is a dog). Snuff is a watcher and a calculator, whose job is to keep an eye on the various Things trapped in mirrors, wardrobes, and trunks around the house as well as to calculate the location for this year's paranormal battle. He has to manipulate a map in his head based on where each of the other players have their home base. His computations are made more difficult by the fact that the Count keeps changing the location of his coffin and Snuff isn't sure if Larry Talbot is a player or not. And should he take any note of the Great Detective and his friend with the military doctor air about him?

This is a rollicking good tale from a master of SF and Fantasy--made even better by the illustrations from the pen of the illustrating legend, Gahan Wilson. We follow Snuff as he loyally helps his master Jack collect the oddest of odds and ends necessary to play the Game properly. Snuff also makes friends with the other familiars--from Graymalk the cat and Needle the bat to Nightwind the owl and Quicklime the snake. Until the "death of the moon" they are allowed to trade gossip and attempt to discover how many players are in the Game as well as what their "persuasion" is (opener vs. closer). When some of the players wind up dead, the animals band together to figure out who is taking out the humans.