The Arsenic Labyrinth (2007) by Martin Edwards 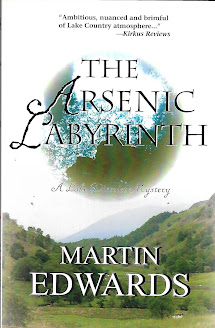 When Emma Bestwick disappeared ten years ago without a trace, the senior detective on the investigating team determined that it was simply a matter of someone who wanted to disappear. No foul play involved. But Hannah Scarlett, a young policewoman--now a DCI, had her doubts. Why would a woman who had just started a business that she seemed to enjoy and who had just come into a large amount of (unexplained) money decide to chuck it all and fade out?
On the anniversary of Emma's disappearance, reporter Tony Di Venuto publishes a retrospective article that asks "What Happened to Emma Bestwick?" DCI Scarlett, now on the Cold Case team, doesn't like being maneuvered into reopening the case by the press but can't really say she's upset when an anonymous caller contacts Tony to tell the reporter that he knows that Emma won't be coming home. Scarlett's boss, always on the lookout for good press for the police, insists that the case be reopened and Scarlett and her team begin making the rounds of the previous suspects--jogging memories and digging up a past that some would like to keep buried.
Then the anonymous caller strikes again--this time telling Tony that he knows where the body is; that the police need to look below the Arsenic Labyrinth. Scarlett's team gets to work searching the long-abandoned arsenic mines and are rewarded with no one body, but two--hidden in the Labyrinth about fifty years apart. Is there any connection besides the convenient hiding place? That's what the police will need to find out. And then body number three shows up.
This is the third book in Edwards' Lake District Mysteries featuring DCI Hannah Scarlett and historian Daniel Kind. In this one, Daniel takes more of a backseat--contributing very little to the more recent murders, but he is able, while doing research on a book about John Ruskin, to track down the details of of the fifty-year-old murder. The reader will need to swallow a heaping helping of coincidence to accept the method by which he comes across his information, but it does make for interesting reading.
The plot is well done and if I had paid attention to certain clues and comments dropped along the way, I might have been able to figure it out--but I didn't. So, well done, Martin, for keeping me distracted with other things. One thing I wasn't too keen on was being inside the head of the "anonymous" caller (anonymous to the report and the police, but not the reader) who had his share of the guilt (though not all of it). I'd rather be in the position of figuring it all out than to know who the villain (or one of the villains) is up front. No a fan of inverted mysteries or even partially inverted. But that's a personal preference. Edwards does a fine job with it and manages to have a final twist that left this reader surprised.  ★★★ and 1/2.
First Line: Who shall I be today?
Last Line: Wanting to go home, yet not sure why, she broke into a run.
***********
Deaths = 4 (two hit on head; one stabbed; one burned to death
Posted by Bev Hankins at 3:51 PM