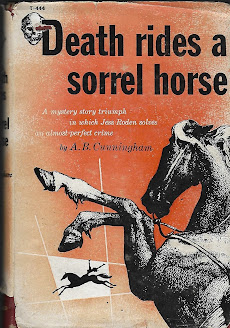 The folks at Friendly House knew something was wrong the moment Zeb, the big sorrel horse, came running home like demons were chasing him and his saddle was empty. It wasn't long before a search revealed that Camille Lang, one of the girls of Friendly House (a sort of girls' finishing school for midwesterners--learning to cook and sew and keep house in a small town), had been tossed from the horse. It looked like the horse had dragged her a ways to where her battered and lifeless body was found in the deep grass along the road.

Carl Quick, the city marshal, would be ready to call it an unfortunate accident if it weren't for one thing...a note tossed onto the porch of Friendly House that murder was suspected:

Theys more to her death than appears on the surface. Better ax Jess Roden to come over from Deer Lick and look into it.

Of course, there's always people looking to stir things up and he'd even be willing to put it down to a notoriety-grabber if that note hadn't appeared so quick after Camille was found. Word hadn't gotten around yet. So, if someone said they knew something, then they probably did. He decides that it probably would be a good idea to call in Roden, the sheriff of Deer Lick county. Roden has experience with suspicious deaths, but this time he's up against something new. A death that looks for all the world like an accident...until he looks closer. Once he finds the fresh cut on Zeb's leg, the evidence that Camille's foot had been tied to her stirrup, and the wound on her head that couldn't have been caused by hitting the ground, he knows that murder has been done. But proving it will be another matter.

This was a quick, easily read little mystery--perfect for when you want a one-sitting book. Roden is a good, ol' country sheriff with a quick eye and a quick wit for discerning what's really going on. I did suspect the "who"--but I missed the big clue that pointed to him/her and then got distracted by a very red herring. A nice, tidy little plot. ★★★

First line: The big sorrel plunged with the headlong recklessness of a horse gone mad with fright.