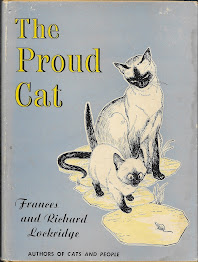 This is a delightful children's book by the authors of the Mr. & Mrs. North mysteries that can be enjoyed by all ages. I already knew that the Lockridges liked and understood cats (and dogs, really) from reading their mysteries. The Norths have cats in every story over a period of 30 years and dogs also appear in a few of those stories as well as in a few of their other mystery series. Their animals are very likable and have very definite personalities and place in the story without being too cutesy.
This particular story, of course, is all about a cat. A cat named Dinah, to be exact. Dinah is a very proud cat. She has been the focus of attention in the Wilson's home (Mr. & Mrs.) for about a year and a half and she's very used to the attention she (rightly) gets from her people. But then one day her people bring home two small-sized humans and Dinah gets a bit miffed. She's just sure that the Wilsons have brought their niece and nephew home to stay and that these small people have taken Dinah's place in their hearts. So, she refuses to make friends with Patty and Howdy (Howard) even though they, too, think she's the finest cat they've ever seen.
It will take several adventures--from chasing off a stray dog to Patty's nursing while Dinah has a cold to the care the children show when Dinah has kittens--to break through her icy, proud armor. But eventually Dinah realizes that she's not too proud to admit she was wrong about the small humans. ★★★★
Posted by Bev Hankins at 9:59 AM